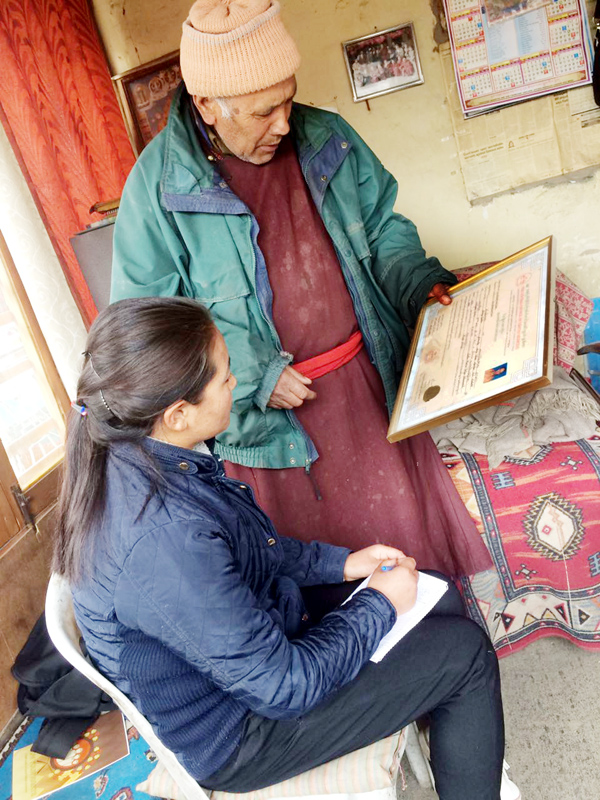 Rigzin Yangdol
In every major village in Leh, Ladakh there is an  Amchi family. The function of this family is to look after the health of the village and the entire community. There is an Amchi in
my village. His name is Karma and he is 56 years old.

Sharing his experience as an Amchi he says, “The main text book of medicine which has been written is known as Gyudzhin.” Karma’s grandfather and father were also Amchis and he learnt everything from them. The Amchi is expected to pass his knowledge and experience to his son and daughter or any other student who comes to learn medicine from him or her. They are expected to memorize the entire text of Gyudzhin, which helps them to study the subject and practice medicine. The children or the students help their father, mother or teacher by collecting herbs and various herbal and other material to prepare medicine. This is the practical aspect of the pharmacy. With course of time the teacher teaches his students the method of diagnosis and the classification of the various diseases.
With the help of detailed commentaries written in the Gyudzhin, there is enormous literature on the subject of medicine, and the Amchi studies and teaches according to his own personal interest and capacity. For the Amchi since this a family subject, it becomes quite easy to pass the experience to his students who are most often the Amchi’s own children, in most cases – his son.
The day the course is completed a day is finalized for a final examination which is held and some well-known Amchi’s from the area are called to take an oral examination of the student. Post this he becomes a recognized Amchi and has to go around to every part of the village curing and treating people. Some people offer him money but this completely depends on the economic condition of that family. The Amchi does not demand for money, instead just provides his services wherever required. The job of an Amchi is not an easy one; he has to do the job of a doctor without any nurse or assistant for help. He does all the work on his own. However, the family he’s providing his services to help him grind the herbs and materials and help as much as they can.
The ‘Onpo’ (Astrologer) from my village says, “Besides the subject of medicine the Amchi has to know about astrology and there are certain surgical operations which the Amchi has to perform which requires the knowledge of astrology such as in the case of ‘Moxibustion’ (a traditional Chinese medicine therapy which consists of burning dried mugwort -mountain rose herbs – on particular points on the body) which is so often used by the Amchi and Onpo for the effective treatment of paralysis”.
On 21st March 2018 I went to meet another Amchi at Moti Market, Leh and his name was Mr. Tsering Stobdan. He is 68 years old and he is from Spituk. He practiced his profession from Dharamsala at the age of 30 and got recognition as he got the degrees of ‘Kachupa’ and ‘Menrampa Dringwa’ from the Central Council of Tibetan Medicine. A medical student graduates after six years as a Tibetan doctor holding Kachupa Degree. After ten years of practice, the doctors are allowed to sit for Menrampa Chungwa degree and then with another seven years gap, they can appear for the Menrampa Dringwa Degree. In Ladakhi language Amchi has various names such as Amji, Manpa, Larjey, and Aba.
The medicine that the Amchi gives has no side effects and the medicine given by hospitals does. For example the tablet for headache affects the liver.
Lastly, I would like to say that being an Amchi is a good job. They are responsible for the welfare of the community and curing and healing anyone who is unwell in the village.
(Charkha Features)