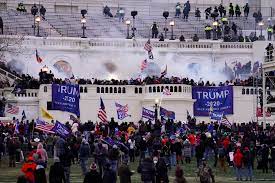 Washington, Dec 15: As a mob overran the US Capitol last January, some of Donald Trump’s highest-profile defenders in the media — and even his own son — sent urgent text messages to the White House chief of staff urging him to get the then-president to do more to stop the violence.
But they did not publicly display that same sense of alarm mere hours after the deadly insurrection.
And they have since joined some of the country’s top Republicans in downplaying Trump’s role in the attack — part of a larger effort to rewrite the history of Jan. 6.
Here are some of the frantic messages that Trump allies sent to the White House chief of staff Mark Meadows as the insurrection was unfolding and what they’ve said publicly about the events since then:

Donald Trump Jr.
“He’s got to condemn this s-— ASAP. The Capitol Police tweet is not enough,” Trump’s eldest son wrote in a text message to Meadows about his father.
That’s according to excerpts read Monday by Republican Rep. Liz Cheney of Wyoming, vice chair of a House committee investigating what happened.
Earlier on Jan. 6, before the violence, the younger Trump tweeted that his father “has the people!!!” over a picture of throngs of pro-Trump demonstrators who gathered in Washington.
When word began to surface that the Capitol was breached, Trump Jr. Changed his tone, tweeting, “This is wrong and not who we are. Be peaceful,” and “Don’t start acting like the other side. We have a country to save and this doesn’t help anyone.”
But, barely a week later — and after the House impeached President Trump for inciting the insurrection — Trump Jr. Began advancing the false narrative that authorities knew violence was coming on Jan. 6 but didn’t do enough to prepare — in part because House Speaker Nancy Pelosi ignored warnings about what might occur.
“If these federal law enforcement agencies had prior knowledge that this was a planned attack then POTUS didn’t incite anything,” Trump Jr. Tweeted on Jan. 14.
“If he didn’t incite anything then Nancy Pelosi and the Dems used impeachment on yet another sham political witch-hunt.”
GOP members of Congress, including House Republican leader Kevin McCarthy, have since advanced similarly false claims about Pelosi delaying military assistance to help Capitol Police officers trying to quell the attack.

“Mark, the president needs to tell people in the Capitol to go home,” the Fox News Channel host wrote, according to text excerpts Cheney read. “This is hurting all of us. He is destroying his legacy.”
But on her show the evening of Jan. 6, Ingraham cited false claims that the rioters included leftist provocateurs, saying, “They were likely not all Trump supporters, and there are some reports Antifa sympathizers may have been sprinkled throughout the crowd.”
She added: “If you are a Trump supporter hoping to display your support for the president, well, today’s antics at the Capitol did just the opposite.”
Ingraham also made a false assertion that there were “legitimate concerns” that voter fraud potentially marred the 2020 election won by Democrat Joe Biden, but she noted, “That never should have lent any license to violence or other chaos.”
Ingraham has since repeatedly downplayed the Jan. 6 attack. In April, she said that “America’s most dangerous insurrectionists” weren’t those who participated in the mob.
Instead, she said, “The real threat to our future is Biden, and the well-heeled, powerful forces who want us to lose sight of what made America great in the first place.”
During a March phone interview with Trump, Ingraham asked him: “Are you concerned that the US Capitol, after Jan. 6, has become a fortress, protecting the Capitol from the people who are supposed to actually be the ones in charge here, not the people who are sitting in the Capitol?” She then didn’t object when Trump said that the mob posed “zero threat” and suggested that authorities were “persecuting a lot of those people” for being a part of it.

“Can he make a statement? Ask people to leave the Capitol?” the Fox News Channel host wrote to Meadows about Trump, according to text excerpts read by Cheney.
During his show the evening of Jan. 6, Hannity said those responsible for the attack “must be arrested and prosecuted to the full extent of the law,” but he also quickly raised concerns that law enforcement wasn’t ready for what happened.
“I don’t care if the radical left, radical right — I don’t know who they are. They’re not people I would support,” Hannity said then. “So how were officials not prepared? We got to answer that question. How did they allow the Capitol building to be breached in what seemed like less than a few minutes?”
During his show on Monday, Hannity called the House committee investigating the attack a “Democrat sham” and a “waste of your time and money.”
He also falsely said Trump had pushed for extra Capitol protection before Jan. 6 but was denied by Pelosi.
He had Meadows on as a guest, but neither mentioned the text messages.
On Tuesday, Hannity opened his show likening what occurred during the Capitol attack to demonstrations around the country after the murder of George Floyd by a Minnesota police officer.
“All riots, obviously, are bad. All of them,” Hannity said. “And on this program, we strongly condemn the violence on Jan. 6 just like we condemned all of the violent riots in the summer of 2020.”
Hannity called Cheney reading his Meadows text “a weak attempt to smear yours truly and, presumably I guess, President Trump,” and argued that what he wrote was consistent with what he said on the air the day of the Capitol attack.
“I say the same thing in private I say to all of you,” Hannity said. (AGENCIES)