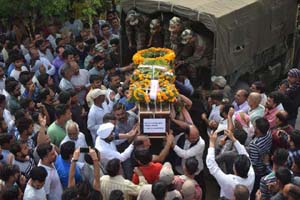 Three BSF soldiers who were martyred in cross-border firing by Pakistan in Jammu and Kashmir were laid to rest with full state honours in their native villages in different parts of Rajasthan today.
Assistant Commandant Jitendra Singh, Assistant Sub-Inspector Ramnivas and Constable Hansraj were martyred in the firing along the International Border (IB) in the Chamliyal post area of Samba district on Tuesday night.
A huge crowd of people, including public representatives, district administration officials and police personnel gathered to bid farewell to the soldiers.
Singh was cremated at his ancestral village, Salempur Kalan, in the Bharatpur district.
“Jitendra’s parents had gone to see him and boarded their train back home from Jammu on Tuesday evening. This turned out to be their last meeting,” one of Singh’s relatives, Manish Rotwal said.
“After their train left for Jaipur, Jitendra went to the post and laid down his life,” Rotwal added.
Rotwal said that Singh’s father received the unfortunate news while he and his wife were still on the train.
Singh’s father hid the news from his mother and she was only informed last evening, Rotwal said.
The assistant commandant’s three-year-old son, Yashwardhan, lit the funeral pyre.
Ramnivas was cremated in Sikar district’s Patan village, while Hansraj’s last rites were performed in the Alwar district.
Hansraj’s wife had given birth to a baby boy last month. He was scheduled to come home on June 15 to meet his son.
Hansraj also has a four-year-old daughter, a family member told reporters.
A BSF Sub-Inspector Rajnish Kumar, a resident of Uttar Pradesh, was also killed and three other soldiers were injured in the overnight firing by Pakistan Rangers. (PTI)