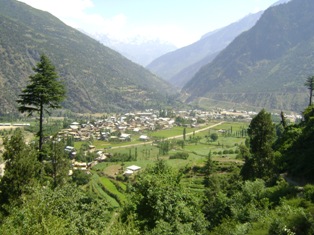 Paddar in District Kishtwar is one of the emerging tourist sightseeing spots in J&K. It has been richly endowed by nature in terms of eco-tourism, adventure tourism, pilgrim tourism etc.
The hot springs of Tatapani also add feather to the beauty of Paddar. The entire Tatapani village abounds in hot springs ranging from extremely hot to mild water. The main spring is rectangular in shape situated in front of Shesnag Temple. The stream coming out of the boiling area is like a small heated chamber. The hot water gets diverted to two small bathrooms marked gents and ladies. On the left side, there is a small ruined structure of an ancient temple covered with sheets and having a modern Siva Ling installed in one corner.
There are two small tanks which receive water filtered from the main tank and diverted to water pipe hanging outside. There is no proper outlet to the water of the spring. Instead it merges in the open drains of the village filled with wrappers of eatable items. The temperature near the drain leads to sweating even during the rains.
Tatapani is a Padri word which in English means “hot water”. A famous hot-spring at Tata Pani (Kundal) has its own importance where streams of individuals rush to possess a shower to get rid of joint pains and skin disorders.
history
It is believed that many thousand years ago, Bal Ram, elder brother of Shri Krishan came to the valley in disguise of Nag Sadhu called Shesnag. He possessed mystical powers relating to water and snakes. When he reached the village (the present Tatapani), he made up his mind to stay there for few days. There lived a local queen namely Ruti whose husband (a local King) had died. When  Shesnag asked her to give him a space, the lady refused and angrily hit the nag in his eye with a spade. She continued to be stubborn, so he stabbed his trishul trident into the ground.  When he pulled it out, a flood destroyed all of Ruti’s land and crops.
A local Rana came from a place called Jaar to Sheshnag and begged for mercy.  Sheshnag then said: “I’m leaving this place and there will be a stone where I would meditate tonight and hot water will ooze here-build a temple here.”
The stone appeared in his form the next day, along with a hot spring, so a temple was built.  The temple today houses the stone of Sheshnag along with a three-inch tall Buddha, conch shells, holy water, ritual bells, tinsel, trishuls for visiting priests, and Shiva and Hanuman posters. The wooden temple is constructed using a design from Spiti, with carvings on its front and back. In the front is  the image of Shesh Naag, the carving of Hanuman the monkey god (symbolizing strength), and an image of Ravana, and forms of Ram, and Shiva, with his trident. At the top are two eyes, representing Mahakali, the Earth Goddess. The springs below the temple bubbles with sulphurous heat, perhaps near boiling at the source.
The heated Sulphur is supposed to help in the treatment of skin diseases and rheumatic pains. A rock floor using stone tongue-and-groove creates a basin that holds water, with excess water flowing into an adjacent room with hot and warm pools for bathing. In the center of the spring is a wooden plug to drain the pool. Once every three years, on the full moon in the darkest and coldest of months (January or February) a family from Chito village comes to clean the springs after midnight. A local fair is held for this ritual celebration. The plug is removed for cleaning and replaced with a new one. This ritual supposedly began when Shesh Naag went to the village asking for help to clean the springs. There he met Chito Devi who went with four or five other villagers. Since then, the villagers of Chito walk from the Paddar Valley to Tatta Paani through the snow.
However, according to the information provided by the sources it is found that there is no proper outlet to the water of the spring.  The area is untidy; there is no provision of dust bins. There is one small so called Dharmsala a two storeyed wooden structure. The ground being used as a store and the upper one has four room accommodations with a beautiful open balcony in the front which provides the panoramic view of the village on the slope. Villagers use Tatta Pani as a naturopathy treatment. The by the PHE department for the visitors is insufficient. One could only stay for two days continuously. There is no provision of food in the village in terms of restaurant or guest house. The Tourism Department should come forward to develop it as a tourist spot on way to Paddar which will be shortly connected to the newly widened road to Chamba (Himachal Pradesh) through the Pangi valley. The water outlet of the hot spring could be provided with separate insulated pipes and diverted to other areas. With beautiful ambience of the River Chenab, small modern bathrooms  with provision for hot water could be constructed.  This will provide hassle free treatment for those who are suffering from rheumatic pains and could not climb up stairs. The tourism department should also explore the possibility of making good comfortable modern accommodation in the village for the visitors who could stay comfortably in the luxury huts with arrangement of the self cooking facilities like in resorts. The facilities and money go hand in hand in tourism and people are ready to pay for comforts.