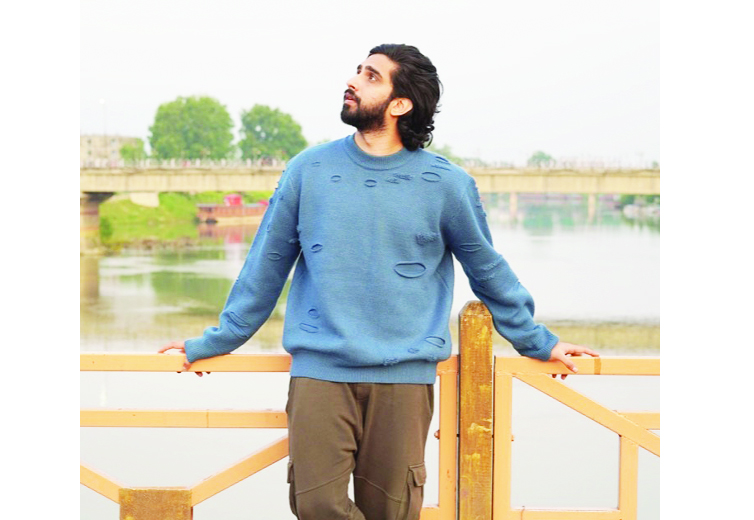 Sanjeev K Sharma, Ritesh Gupta
The upcoming Film Festival in Kashmir this month will witness an interactions of national cinema with cinema from Kashmir along with interaction of music, culture, movies etc. To host such events is important for a place like Kashmir as because of such things the people will change their perception regarding Kashmir and will experience that it is not a place of terror but people here are good and the place is beautiful.
This was stated by Amaal Mallik, Bollywood Music Director, Composer, Singer and Music Producer in an exclusive interaction with Excelsior.
Mallik said that it was his first visit to Kashmir for a music project and regretted that he can’t extend his trip.
He said that Kashmir is a beautiful place with people so wonderful and food amazing and called the place as “a truly heaven on earth.”
“I was in Kashmir for a video shoot for my next independent music and song and I barely stayed there for 2-3 days,” he said.
The Music Director said that Film Festival in Kashmir will help Kashmiri actors, musicians, singers and others with a platform.
“There are lot of talented directors, editors and singers in Kashmir some of whom are never heard of and they simply sing and put it on Instagram,” he said adding that certain singers in valley lack Hindi pronunciation though their Urdu is strong.
Mallik said that be it Srinagar or Gulmarg, at every place in Kashmir there are musicians in dozens playing guitar, Rabab etc in beautiful environment and he wished such things might be there in his city.
“They have knowledge of poetry. Shairi and musicality exists in Kashmiris from childhood. They should come to Bollywood and try luck and meet people if they want to be part of film industry,” he further said.
The Bollywood Musician said that music was something he was born with.
“My mom saw my love for piano, casio, keyboard and when I was at very young age of eight years someone gifted me that and I started spending a lot of time with those instruments,” he said adding: “Then my mom helped me to better my skills with a music teacher and my dad guided me with the working in film industry.”
“I was privileged and honoured to be born in such a historical legacy of Sardar Malik and Daboo Malik and I grew up spending a lot of time with my grandfather (Sardar Malik) who was a film composer himself,” he said.
The popular Musician informed that there used to be music sittings at his home and he grew up with film music and learned western classical during his college days.
“I feel Hindustani music is something that I have been not formally trained in but my grandfather informally trained me in that and that sometimes is reflected in my songs like Salamat, Roke Na Ruke Naina,” said Music Director, Mallik.
He said that in childhood he used to play a lot of sports and wanted to play cricket professionally but somewhere when he was 16 years of age he made a music composition and showed it to his father who encouraged him by saying that music was his world where he should be.
“By then there was no other option but film music and film industry to enter as a musician and independent music was absent then and I was struggling and beginning my career,” he said.
“Now it is a great time to pursue career in music independently and if you want to be part of film industry you can do so step by step and it is not easy,” Mallik continued.
“It took me 16 years to realise my dream and have success that I have today. My heart went to music the day my father approved my first composition and I decided to be a Film Composer obviously to take the legacy of the Maliks forward and independent music was my dream since childhood and now after 16 years I have taken that step of doing music videos on my own label and in my own way for my fans,” he asserted saying that he can do all type of music.
“I’m a music composer who can adapt. As a human being I am an emotional man who thinks from heart. I have a lot of fans today who call me king of melody and king of romance in music,” the musician said.
“I am a composer who works according to what my director needs. I have kept my ears open to every kind of music. What a particular film or project requires, I can adapt myself to that and I can adapt several styles,” he said.
“I work hard on my lyrics, I keep up-to-date with sound working in our country and globally, I don’t really complicate my composition and all this truly helped me. I think a song has a simplicity with which we say things. Simple lyrics of great thought and simple composition touches your heart,” he said stressing on the importance of patience and says that step by step an artist learns the pulse of audience.