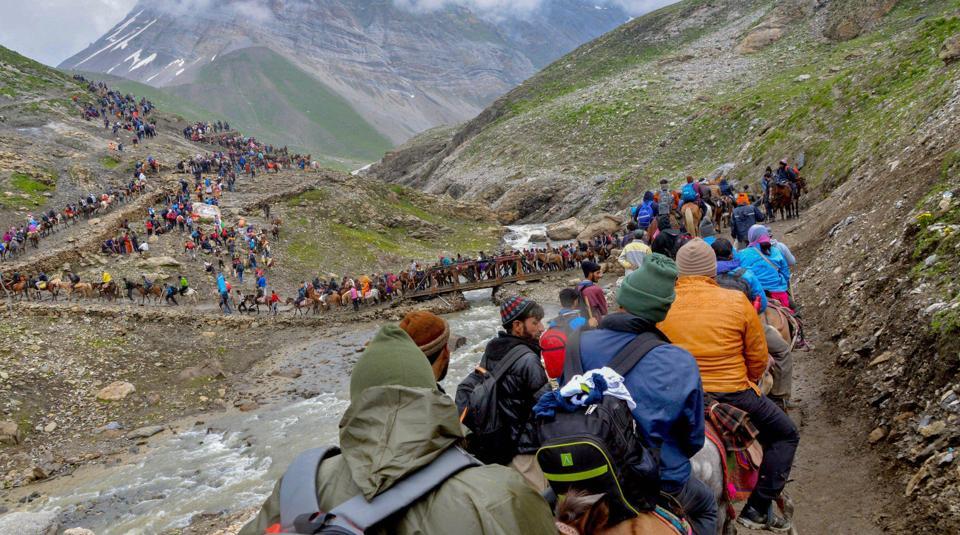 JAMMU, May 15: Amidst surge in targeted killings and upcoming annual pilgrimage of Shri Amarnath Ji beginning June 30, Union Home Minister Amit Shah will hold high level review of security situation of Jammu and Kashmir, in New Delhi on May 17.
The meeting is scheduled at 11 am in North Block on May 17 and will be chaired by Shah, official sources told the Excelsior.
Lieutenant Governor Manoj Sinha, Chief Secretary Dr Arun Kumar Mehta, Additional Chief Secretary (Home) RK Goyal, Director General of Police (DGP) Dilbag Singh and Special DG CID Rashmi Ranjan Swain have been called for the meeting from Jammu and Kashmir.
Union Home Secretary Ajay Kumar Bhalla and heads of all Central Armed Police Forces (CAPFs) and Central Intelligence agencies besides other senior officers of the MHA will attend the meeting.
The Lieutenant Governor today left for New Delhi from Srinagar for attending security review meeting and other important assignments.
Ahead of high-level security review, Director General of Central Reserve Police Force (CRPF) Kuldiep Singh today reached Jammu and reviewed security arrangements for Shri Amarnath Ji pilgrimage at Yatri Niwas in Bhagwati Nagar area with top officials of the paramilitary force.
After security review meeting, the DG CRPF left for Kashmir for similar reviews of Shri Amarnath ji yatra arrangements. He will return to the Union capital tomorrow to join the meeting called by Amit Shah on Tuesday morning.
Sources said Shah will review entire gamut of security scenario in Jammu and Kashmir in the wake of recent targeted killings and arrangements for upcoming pilgrimage of Shri Amarnath Ji.
Some decisions could be taken on curbing targeted killings and preventing any kind of subversive activities during Shri Amarnath Ji yatra beginning June 30 and lasting till August 11.
Though there has been spurt in targeted killings, security forces and Jammu and Kashmir Police have also killed large number of militants including top commanders in the Valley.
The anti-militancy operations might be further stepped-up ahead of the pilgrimage, sources said.
On May 13, Union Home Secretary Ajay Kumar Bhalla reviewed security scenario of Jammu and Kashmir with top brass of civil and police administration and Intelligence agencies from the Union Territory and CAPF and Intelligence agencies’ heads from New Delhi.
The MHA has asked the Jammu and Kashmir administration to submit details about requirement of additional companies of Central Armed Police Forces (CAPFs) for deployment during the pilgrimage, sources said.
“The Central Government as well as Jammu and Kashmir Government are concerned over yatra arrangements. They want fool-proof security arrangements to be in place for the pilgrimage,” they added.
They said that the Central and J&K Governments don’t want to take any chance with the yatra arrangements.
This time, security arrangements are going to be more stringent as the pilgrimage is taking place after two years. In 2019 when the yatra was last held, the Union Ministry of Home Affairs had sanctioned 336 additional paramilitary companies for the yatra. This year, the number is expected to be around 400 companies.
The yatra couldn’t be conducted in 2020 and 2021 due to COVID pandemic while it was cut short by about 15 days in 2019 ahead of Central Government’s August 5 decisions to scrap special status of Jammu and Kashmir and bifurcate erstwhile State into two Union Territories of J&K and Ladakh.
The Home Department and Police Headquarters are working out details of the paramilitary companies which would be sought from the Union Home Ministry for the yatra.
“The details will be worked out this week and sent to the Home Ministry,” sources said.
As per the reports, the Jammu and Kashmir Government could seek at least 400 additional companies of CAPFs from the Centre for making fool-proof security arrangements for Shri Amarnath Ji pilgrimage. The numbers are being worked out taking into account targeted killings by the militants and steps required to protect the soft targets as well as the pilgrims all along the National Highways including Pathankot-Jammu and Jammu-Srinagar besides twin tracks of Baltal and Nunwan, base camp in Jammu and all other vulnerable areas.