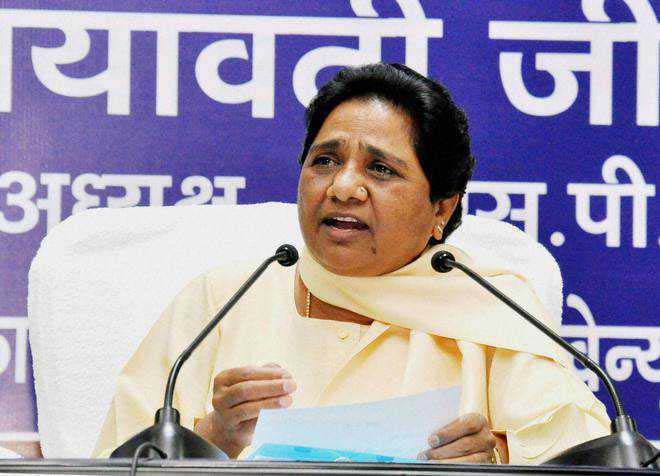 LUCKNOW, July 13:
Calling for a stringent law against rising incidents of mob-lynching, Bahujan Samaj Party (BSP) president Mayawati on Saturday said not only the Dalits, tribals and religious minorities, but everybody, including police, were becoming victims of the violence.
In a statement released here, Ms Mayawati said that ‘mobocracy’ was spreading like a terrifying disease in the country, alleging that it was increasing because the Bharatiya Janata Party (BJP) governments were not being able to establish the rule of the law.
The BSP honcho said that earlier, there used to be stray incidents of mob-lynchings, but now these cases had become common.
Ms Mayawati said the people were a worried as the democracy was turning into violent mobocracy and vigilantism.
The Supreme Court had also taken cognisance of the matter and directed the Centre and state governments to counter such incidents, yet the Union and state governments have not taken it seriously, she said.
Ms Mayawati said that the initiative of the Uttar Pradesh State Law Commission, that there should be a separate, strict law to curb such incidents of mob lynchings, is a welcome step.
The Commission has submitted a draft law, “Uttar Pradesh Combating of Mob Lynching Bill (2019)” to the UP Government which proposes life imprisonment to the culprits.
The BSP supremo said due to the rising incidents of mob frenzy, the tension in society has also risen. The violent mobs know that they can get away with such incidents in the name of religion and caste and they believe that the BJP government will protect them. Due to such mindsets, incidents of mob lynchings continue to occur.
Further, Ms Mayawati said that the recent incident of Unnao also proves how stressful the social life has become and how it is affecting everyone in some or the other way, which is extremely sad. (UNI)