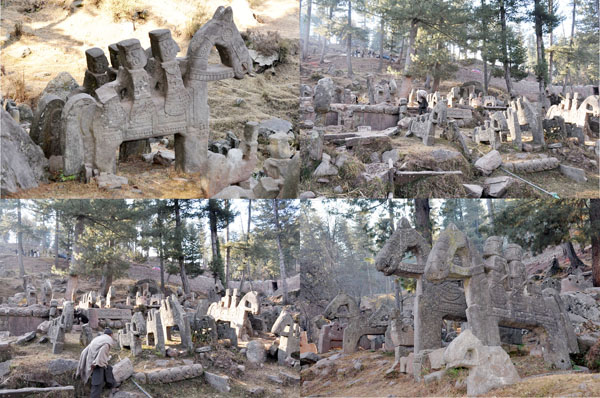 Rajinder Singh Rana
Ramban located in the lap of Pir Panjal range of the mighty Himalayas is a beautiful combination of magnificence, tranquility and a quiet retreat. Meadows, snow capped Pir panjal mountains and gently rolling Basantadar ridge creates a breathtaking panoramic view.
Bestowed with a pristine rustic charms Gool offers for nature lovers an everlasting experience of which Ghora gali is one such ancient sculptural marvel situated in village Gool on Gool-Sangaldan road 50 km from district headquarter Ramban and 200 km from Jammu.
A treasure-trove of large stone sculptures spread in 4-5 kanals of area, mostly relics are believed to be personally sculpted by the Pandavas during the age of the Mahabharata. The art work on stones is very fine and depict highest form of artistic skills of that time. Even after thousands of year the art on sculptures appear very explicit.
It is believed that wherever the Pandavas stayed in district Ramban or Reasi, they continued the work of stone engraving and that is why similar types of sculptures are found at Gadi Nalla and Nar area of Tehsil Gool and Sildhar area of district Reasi near Mahore. But to reach all these places one has to undergo trek through sloppy hills. The Sculptures of Sildhar have different folk tales associated with them. The evidences and stories connected with these places are an expression and insight into the traditional beliefs, customs, and stories of a community, passed through the generations by word of mouth.
The site also houses broken parts of sculptures. Besides, water openings are found in the graven stones. This place was once major source of drinking water flowing through these stone outlets but at present few wells are the source of water in this area.
Alongside wells at Ghora Gali some of which dried now, large stones having traditional arts and images are also seen which reveal similarity with devta culture found in rural pockets of Ramban and Reasi. The Kul Devtas of some of the Hindu families worshipped by people in the area show similar revelations. In all respects, the place evinces our keen interest and gives an antiquated view.
Likewise in Ind, Koot Hara, Ghagra and Barlas Rai Kund areas of Gool ancient type of more water outlets in the stones, bowalis (Wells) and other stone seats are seen. All these places are mostly at high elevations from rest of the settlements. In Barlas Rai Kund, one can still witness remains of a temple.
At Salbala, devata of Mata Kalyari is located and close to it a Bowali where stone lion with water opening is found. In village Jawari Gam, Shakpal devta keeps its unique importance for local people. Similarly at Seya Baggi stone door frame is seen with large number of stone horses scattered. At Gam, Seya Baggi and Bisha Galli annual functions by local Rajputs are also organised . At these religious destinations, Kuds and yatars are usually held for the whole night. Popular local deity of Maha Kali at Banjoni also attracts several devotees on every Tuesday .
Apart from ancient sites, Tata Pani (Hot Spring) near Sangaldan is no less important for attracting tourists and visitors. Even today people from Reasi, Chillad, Dharmari, Ramban, Thuroo, Mahore, Siraj, Banihal, Udhampur, Bakkal and from many other villages pay visit there and take dip for health benefits . Near Tata Pani one small holy cave is another attraction for the visitors.
Moreover, beautiful lawns, pastures and green Margs of Daggan top, Chamsar top, Shinkli top, Ranjati and Ramakunda situated in the upper belts of Gool are immensely filled with serenities and panoramic views. During summers, local visitors are seen enjoying the natural beauty of these solitary places. Department of Archaeology has excavated many historical sites for analysis of their material remains throughout Jammu and Kashmir but this unique place in Ramban dotted with attractive sculptures and symbols engraved on the stones near water resource need to be explored and brought to limelight. There is every possibility that this site may offer many unseen unexplored ancient sculptures which are a witness to the history that might still be unheard of.
The enchanting beauty and historical importance of such places located on sleeping hill place have remained uncharted for the tourists coming to the state and therefore synchronized efforts are required to bring it on the tourist map . Steps are required for proper protection of the sites as originally as possible in their existing substance and to pass them on to future generations as “genuine” cultural heritage.
Associating all the stakeholders in conservation of the historical places and exploration of other major tourist sites besides proper propagation through social media and better connectivity with major road networks are necessitated for improving tourist footfall in the area.
Government has initiated various steps to promote tourist infrastructure and other logistic facilities in the area. Recently funds have also been sanctioned for constructing boundary walls at Ghora Gali which may be a start towards its development. The upcoming railway lines passing through Sangaldan and ambitious four lane many further broadens the scope of the site from tourism point of view.
(The author is serving as District Information Officer Ramban)