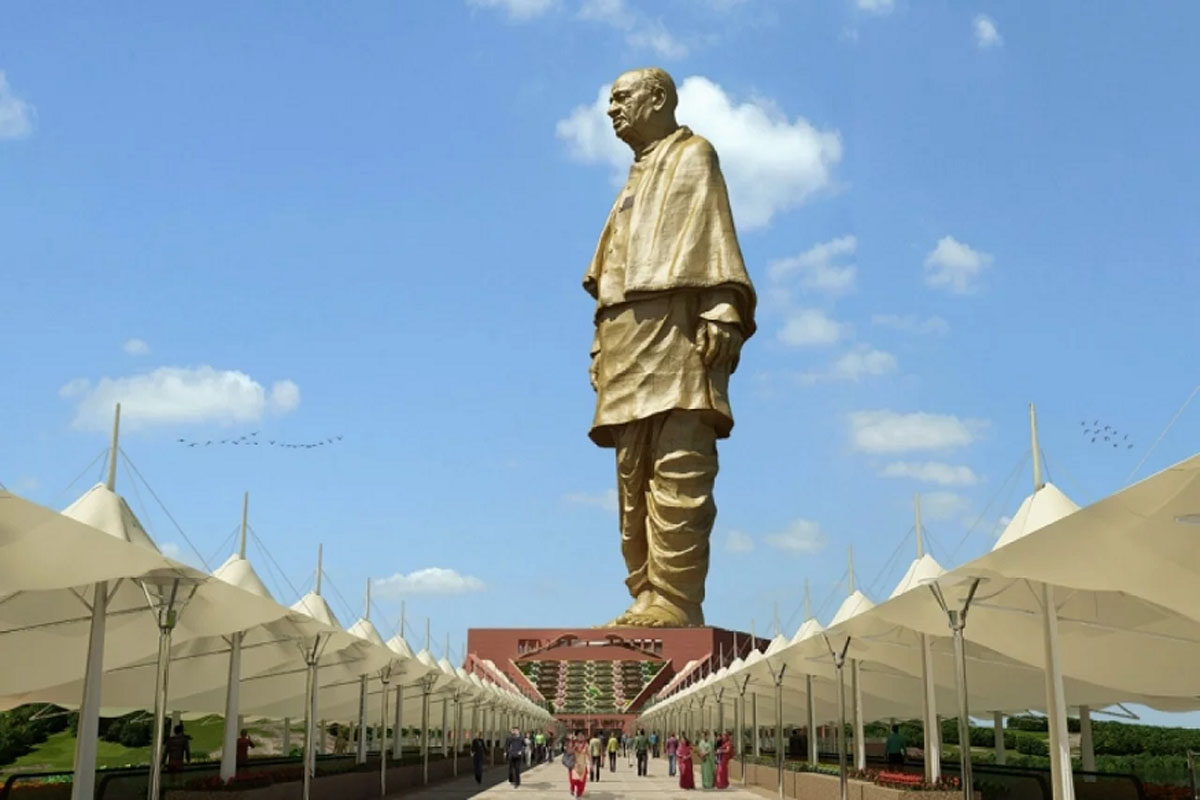 NEW DELHI, Oct 28: The Statue of Unity, built as a tribute to Sardar Vallabhbhai Patel known as Iron Man of India, would be the tallest in the world and the quickest to be completed in just 33 months unlike China’s Spring Temple Buddha which took 11 years to complete, infrastructure giant Larsen & Toubro claimed.
At 182 metres from the road entry and 208.5 metres from the river entry, the iconic statue is taller than the 153m Spring Temple Buddha in China and almost twice the height of the world-famous Statue of Liberty in New York.
The giant statue is set for inauguration by Prime Minister Narendra Modi on October 31.
Built at a cost of Rs 2,989 crore, the Statue of Unity project, barring bronze cladding which is a fragment of the mammoth work, has been done indigenously, L&T said.
The statue is located approximately 3.5 km downstream from the Sardar Sarovar Dam, on Sadhu Hill on the bed of the river Narmada.
The raft construction of the structure actually begun on December 19, 2015, and took 33 months construction time for completion. It devoured 180,000 cu m of cement concrete, 18,500 tonnes of reinforced steel, 6,500 tonnes of structured steel, 1,700 tonnes of bronze and 1,850 tonnes of bronze cladding, the conglomerate said.
The statue is conceived as a naturalistic depiction of Sardar Patel in characteristic garb in a walking pose and it rises out of a star-shaped, geometric base that covers the entire Sadhu Hill.
Also the statue is slender most at the base, which goes against the norms of what other tall statues have followed. The walking pose also opened up a gap of 6.4 metres between the two feet which then had to be tested to withstand wind velocity, the company mentioned.
“The statue structure was to be designed for 180 km per hour wind speed. And if you have seen all the huge statues in the world they have a wide base on which they stand. In case of this statue, the standing leader’s two legs were to be shown separate, which resulted in a narrow base for the structure. This was the biggest challenge, as one has to make the structure withstand the high wind speed at the same time, it should meet the sculptors’ aesthetic requirements,” said L&T.
Another challenge was the statue is of a living legend and not an imaginary persona.
“We evolved the design of the statue by using various techniques. We collected around 2,000 photographs from archives and zeroed in on one photograph, after consulting multiple stakeholders like historians and people who had seen Sardar. We used technology to convert the 2-dimensional photograph into a 3-dimensional model,” L&T said.
The shape of the shawl, its fall and texture are unique considering the peasant background and the sculptor Ram Suttar had to work hard and diligently to come as close to reality as possible, L&T said. (PTI)