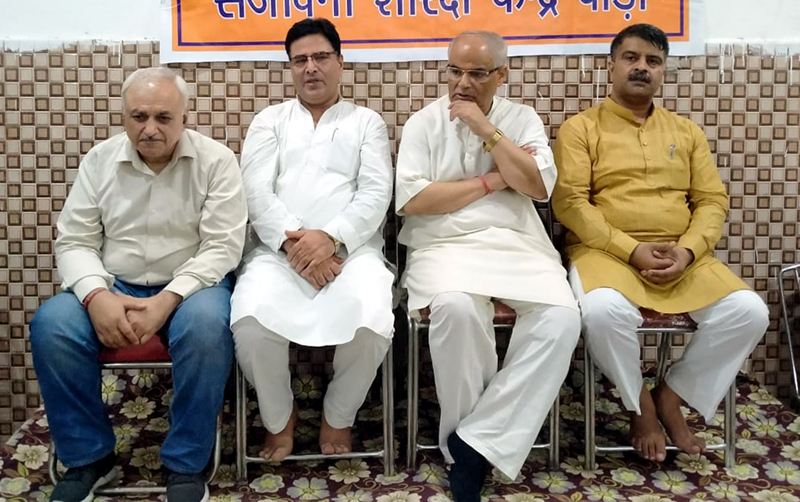 Excelsior Correspondent
JAMMU, Sept 29: To remember the martyrs of 1967 Sangarsh Gatha a programme was organized at Sanjeevani Sharda Kendra Anand Nagar Bohri near here. today.
The function was presided over by RSS Seh Prant Pracharak J&K, Mukesh while Ashok Kaul BJP general secretary (Org) was the chief guest and advocate Chander Mohan Bhat was the guest of honour.
The welcome address was made by Dwarika Nath of SSK. He also gave an account of the functioning of SSK.
Ashok Braroo a social activist threw light on the genesis of 1967 agitation to protest against the forced conversion of a Hindu girl in Valley when entire Kashmiri Hindu community took a banner of revolt against the then State administration which had connived with the fundamentalist forces responsible for the forcible conversion of a Hindu girl then. He said it was the unique, most united and peaceful agitation of the community against the oppression of the then administration which was hand in glove with the communal forces in Valley then.
CM Bhat, advocate said recalling martyrs like Maharaj Krishan who sacrificed his life should inspire us to act and live for welfare of the community. “Our honour and welfare are directly connected to our people’’, he added.
Ashok Kaul, general secretary, BJP recalled the agitation as he lived near the epicenter of agitation, Shitalnath as a young boy. He gave several accounts of brave acts of community people including women, youth as well as old members. He recalled the role of Pt Amarnath Ganjoo, Amarnath Vaishnavi, Tikalal Ji, Neter Pal Shastri, Shamboo Nath Kachroo, P N Gassi and several others.
RSS Seh Prant Pracharak, Mukesh said the results of a feat are not as important as the valour and united efforts of a community to raise voice against the atrocities. Recalling such history and communicating to younger generations is necessary to inspire them, he added.
Madan Khashu who had come from Gujarat for the today’s programme gave an account how the agitation began in his home turf Rainawari. Madan, Neter Pal (posthumously) and Bal Pandita were honoured for their services in the Maha Gatha of 1967. Tej Krishan Jigyasu presented vote of thanks and programme was compared by Rajinder Chrungoo.

Won’t allow anyone to fiddle with syncretism of J&K: Nasir