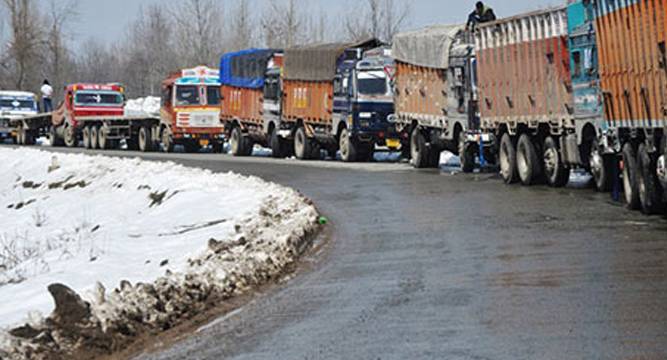 SRINAGAR : The 270-km-long Srinagar-Jammu national highway, connecting Kashmir valley with the rest of the country, was closed due to massive landslides and shooting stone, triggered by rain, a traffic police official said Friday morning.
However, the national highway, linking Union Territory (UT) of Ladakh with Kashmir valley and the historic 86-km-long Mughal road is through for traffic though only vehicles carrying essentials and fruit are allowed to ply.
Traffic official said this morning that traffic on Srinagar-Jammu national highway was suspended on Thursday night after massive landslide at Mehad near Ramban. However, the National highway authority of India (NHAI) and Border Roads Organisation(BRO) have pressed into service sophisticated machines and men to put through the road.
He said work was going on when the reports last came as huge part of the road has been washed away.
The traffic department has already announced that there will be no traffic on the highway on Friday. Traffic will be resumed only when a green signal is received from NHAI and traffic police personnel deployed at different places on the highway, he said.
Passenger traffic on the highway, the only all-weather road connecting Kashmir with the rest of the country, remained suspended since March this year when the lockdown was imposed in the UT of J&K due to COVID-19 pandemic.
Interestingly buses carrying workers and labourers from outside were allowed to bring them to Kashmir valley from Jammu. However, a large number of these labourers tested positive to COVID-19.
However, trucks carrying essentials and oil tankers besides security force vehicles are being allowed to ply on the highway with some restrictions.
Traffic officials said Srinagar-Leh highway was through for traffic. Today essential commodity vehicles were allowed to ply Srinagar to different parts of the Ladakh UT. However, he said, drivers are requested to contact traffic police units before starting the journey. But, he said, no passenger vehicle will be allowed due to COVID-19 restrictions.
Similarly, he said, the historic Mughal road, linking Shopian in south Kashmir with Rajouri and Poonch in Jammu region. On Friday vehicles carrying fresh fruit from different parts of the valley will be allowed to ply towards Poonch, Jammu.
However, the vehicles had to ply between 1100 hrs to 1600 hrs and no vehicle will be allowed after the deadline.
(agencies)