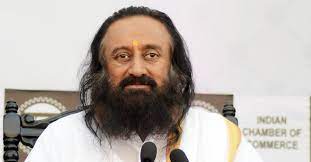 WASHINGTON, Dec 1: Indian spiritual leader and global humanitarian Sri Sri Ravi Shankar was bestowed with the prestigious “The Emissary of Peace” award by the National Civil Rights Museum in the US city of Memphis.
Shankar, 66, addressed by followers with honorifics such a Sri Sri and Gurudev, is the founder of the Art of Living, a volunteer-based, non-Governmental organisation that offers several stress-elimination and self-development programmes based on breathing techniques, meditation and yoga.
He arrived in Memphis on Monday as part of his “I Stand for Peace” tour.
“On behalf of the National Civil Rights Museum, it is our greatest pleasure and privilege to present to Gurudev Sri Sri Ravi Shankar ‘The Emissary of Peace’ award,” said Shaila Karkera, Director of the Board, the National Civil Rights Museum on Wednesday.
She was joined by Herb Hilliard, Chairman of the board of NCRM in presentation of the award.
“As a global humanitarian, a peace ambassador, the founder of SKY programs and Healing breaths, you have touched millions of people in 180 countries…and for your conflict resolution initiatives we are honoured to present to you this special award,” Karkera said.
The Indian spiritual leader was presented the award during his global “I Stand for Peace” campaign which arrived in the Mid-South early this week, according to a press release issued by Arts of Living.
“I Stand For Peace” event in Memphis was attended by over thousands of people affirmed their commitment to inner and outer peace.
The Indian leader also met with local officials, including members of city council, the department of education, and the department of justice to discuss ways to reduce violence, especially among youth.
“Let us come together to spread the message of global peace,” he said.
“Conflicts and wars not only destroy our environment but also harm the physical and mental health of the individual. World peace is impossible without individual peace. We must achieve inner peace if we hope to achieve outer peace,” he added.
Earlier this month, The Gandhi Foundation at the Martin Luther King, Jr. Centre for Nonviolent Social Change, in Atlanta honoured him with the Gandhi Peace Pilgrim award, to recognise his commitment to the development of peace and non-violence. (PTI)