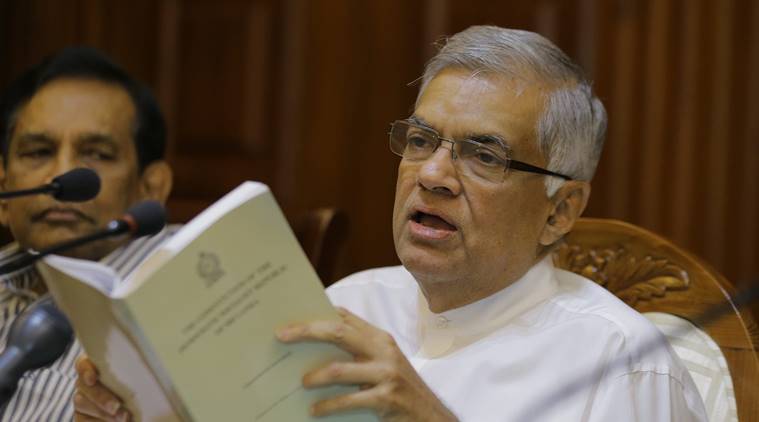 COLOMBO, May 27: Sri Lanka’s top political leaders met Prime Minister Ranil Wickremesinghe on Friday and discussed key constitutional amendments and agreed that the 21st Amendment to the Constitution aimed at curbing the unfettered powers of the President should be passed as soon as possible.

“Pleased that there was a general consensus regarding the need to amend and pass a 21st Amendment to the Constitution,” Wickremesinghe tweeted.

He noted that a final meeting has been scheduled for June 3 due to the Tamil National Alliance being unable to attend today’s meeting which was held for party leaders to present their observations regarding the draft amendment.

Earlier, the Prime Minister’s Office, in a statement, said that a “general consensus” was reached that a 21st Amendment to the Constitution had to be passed as soon as possible.

Following the discussions, it was decided that as the Tamil National Alliance could not attend Friday’s meeting, a final meeting will be held on next Friday with the TNA’s attendance, so as to finalise the draft.

The Prime Minister also announced that during the week if any parties wished to seek further clarification they could do so from the Minister of Justice Wijedasa Rajapaksha.

The constitutional reform was a major plank of the agreement between Rajapaksa and Wickremesinghe when he took over the job of the prime minister on May 12. President Gotabaya Rajapaksa had also pledged reforms in the Constitution in an address to the nation earlier this month.

The 21st Amendment would make it impossible for those with dual citizenship to hold a seat in Parliament. President Rajapaksa, who is facing growing demand for his resignation for mismanaging the country’s economy, had relinquished his US citizenship in April 2019 before contesting the presidential elections.

The 21st Amendment to the Constitution has become an overwhelming demand amid an ongoing economic and political crisis in Sri Lanka. Public protests have been going and the protesters demand that the 20A be repealed as it has made the presidency all too powerful.

Justice Minister Wijayadasa Rajapaksa had earlier said that the 21st Amendment seeks to further strengthen the powers of the existing commissions and to make them independent as well.

The justice minister said the new amendment also proposes for the appointment of the Governor of the Central Bank to come under the Constitutional Council.

The powerful Rajapaksa family tightened their grip on power after their massive victory in the general elections in August 2020, which allowed them to amend the Constitution to restore presidential powers and install close family members in key positions.

In his 2019 presidential bid, Gotabaya Rajapaksa won a convincing mandate for a presidency during which he sought full presidential powers over Parliament.

Sri Lanka is grappling with an unprecedented economic turmoil since its independence from Britain in 1948.

A crippling shortage of foreign reserves has led to long queues for fuel, cooking gas and other essentials while power cuts and soaring food prices heaped misery on the people.

The economic crisis has also triggered a political crisis in Sri Lanka and a demand for the resignation of President Gotabaya Rajapaksa. The crisis has already forced prime minister Mahinda Rajapaksa, the elder brother of the president, to resign on May 9.

Meanwhile, the Prime Minister also held discussions with the representatives from the agriculture sector to discuss the food shortage in the country.  (PTI)