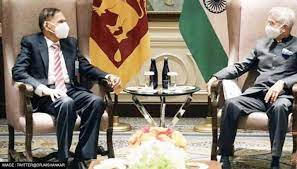 NEW DELHI, Feb 6: External Affairs Minister S Jaishankar is scheduled to hold extensive talks with his visiting Sri Lankan counterpart GL Peiris on Monday, days after India extended a USD 500 million credit line to the island nation.
According to the Ministry of External Affairs (MEA), Peiris is visiting India from February 6 to 8.
Foreign Secretary Harsh Vardhan Shringla will also call on the visiting dignitary on Monday, according to the MEA.
India on Wednesday extended a USD 500 million (one million is equal to Rs 10 lakhs) credit line to Sri Lanka to help it purchase petroleum products.
Sri Lanka has been reeling under a severe foreign exchange and energy crisis.
India’s assistance of USD 500 million to Colombo came over two weeks after a virtual meeting between Jaishankar and Sri Lanka’s Finance Minister Basil Rajapaksa on January 15.
In their talks, the two foreign ministers are expected to delve into ways to further expand bilateral cooperation in diverse areas including trade and investment.
The contentious fishermen issue is also likely to figure in the talks.
On January 25, 56 Indian fishermen were released by Sri Lanka.
Last month, the island nation signed a deal with the Sri Lankan chapter of Indian Oil Corporation (LIOC), Ceylon Petroleum Corporation (CPC) and the joint venture between LIOC and CPC to redevelop around 75 oil tanks in Trincomalee.
The deal is expected to assist Sri Lanka in the development of Trincomalee as an energy and transport hub to further bolster its energy security.
During Peiris’s visit, India is also likely to convey to him the need for fulfilling the expectations of the Tamil people living in that country for equality within a united Sri Lanka. (PTI)