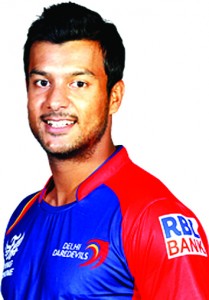 Born on February 16, 1991, Mayank Agarwal in Bangalore, Karnataka, India is an Indian cricketer, and an alumnus of the Bishop Cotton Boys’ School. He is an attacking opening batsman who currently plays Twenty20 cricket for Karnataka. He has played 8 matches for Royal Challengers Bangalore, scoring 141 runs at an average of 20.14. He shot into limelight with his impressive performances in the Under-19 Cooch Behar Trophy in 2008-09 and 2010 ICC Under-19 Cricket World Cup, in which he was the leading run-getter for India. He was also adjudged Man of the Series in the Karnataka Premier League in 2010. He also scored a century in that tournament.
Mayank Agarwal is an explosive right-hand opening batsman from Bangalore, who has modelled his style of play on Virender Sehwag. Agarwal smashed 432 runs at an average of 54 in five matches in the Under-19 Cooch Behar Trophy in 2008-09. He toured Australia in 2009 with the U-19 side and hit a match-winning 160 in a one-dayer.
Agarwal was a bright spot in a disappointing Under-19 World Cup for India in 2010, top-scoring for his side in the tournament. He was a consistent performer for Karnataka in the Syed Mushtaq Ali Trophy in the 2010-11 season, scoring 166 runs at a strike-rate of 139.49. He was also Man of the Series in the 2010 Karnataka Premier League, making the only century of the tournament.
In 2011, he was selected to play for the Bangalore Royal Challengers in the IPL. 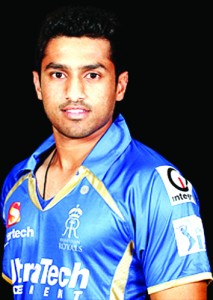 Questions of this week:
1. Who top scored for India A in the first match of the ongoing Tri-Series against                              Australia?
2. For which team Kedar Jadhav played in IPL-8?
3.    Who won Domel dangal title recently?
4.    Which rank Sania Mirza holds in World Tennis?
5.    Who is Palak Kour?
Answers of the last week:
1. Lokesh Rahul 2. RCB 3. Briju and Benia Min 4. No-1 5. J&K’s ace Gymnast.
The best entry of this week was received from Sanjay Dhar, Lane No 1, H No-3, Upper Laxmi Nagar, Sarwal Jammu.
The other entries of the week were from Gaurav, Rehari Colony, Jammu; Anil Kumar, Trikuta Nagar, Jammu; Ankit Chauhan, Talab Tilloo, Jammu; Parvez Ganie, Soura Srinagar and Rajiv Sanmotra, Kishtwar.