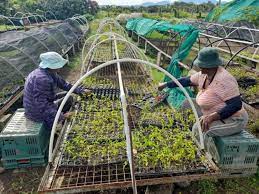 Melbourne, June 29: Climate change is taking a tremendous toll on the world’s food systems, leading scientists to rethink how we feed ourselves.
Frequent and recurring climate shocks continue to drive acute hunger around the world.
As a report released this month by The Food and Agriculture Organization and World Food Programme warns, we have entered a ‘new normal’ where droughts, flooding, hurricanes, and cyclones repeatedly decimate farming and livestock, displace people and push millions to the brink of starvation. Combined with the fallout from COVID-19, rising geopolitical tensions, growing public debt burdens and now the Ukraine war, global agriculture is facing a ‘perfect storm’.
At the UN’s Economic and Social Council meeting in New York last week, Deputy Secretary-General Amina Mohammed said the world urgently needed new approaches and policies, commensurate with the obstacles faced.
“This must be done with a sense of urgency and scale to get ahead of the crises,” he said.
The good news is scientists, technology start-ups and large food corporations are finding new ways to disrupt traditional food systems and supply chains — for many, the impending crisis offers an opportunity.
From 3D-printed meat to genetically edited crops and cows, new technologies offer hope of sustainably feeding a global population predicted to rise from 7 billion to 9 billion by 2050.
But are recent advances being over-hyped in the rush towards ever-more sophisticated technologies?
The history of agricultural modernisation suggests increased productivity carries potential risks.
The negative effect of climate on food systems is nothing new. Indigenous cultures have lived in variable climatic conditions for centuries and can offer important lessons. Either way, increasing food production in ways that respect human well-being and the environment presents an enormous challenge.
REALITY CHECK

Human-induced global warming trends since 1961 have slowed the growth of agricultural productivity by 21 percent.
Without urgent action on climate change, an additional 100 million people in Africa could be pulled into extreme poverty in the next eight seasons – that is more than 10 million people every year to 2030.
Two-thirds of the 740 million people living in extreme poverty are agricultural workers and their dependents. Underinvested, inequitable food and land use systems consign many to lives of constant insecurity.
Transforming food systems could help release back the US$12 trillion the world spends on the hidden cost of food.
BIG IDEAS
Quote attributable to Élisabeth Abergel, Université du Québec à Montréal:
“Meat from gene edited animals is on the horizon. Gene editing promises to be cheaper than GM technology and faster than conventional breeding.”
Quote attributable to Aaron Staples, University of Michigan:
“There is recent evidence that some consumers are willing to pay a premium for beer produced using sustainable techniques, particularly for targeting water sustainability practices.”
Quote attributable to Rabiya Abassi, University of Alberta:
“Agriculture is in the midst of a fourth industrial revolution. And in the face of rising populations and a changing climate policymakers are paying attention.”
Quote attributable to Agustin Zsögön, Federal University of Viçosa:
“With Ukraine and Russia among the world’s largest exporters of maize and wheat, global food security is under threat. Even if trade is restored, an overreliance on so few species remains our achilles heel.”
Quote attributable to Anitra Nelson, University of Melbourne:
“Degrowth is moving policymakers and attracting attention from all those keen to curb carbon emissions and live sustainably.” (360info.Org)
(AGENCIES)