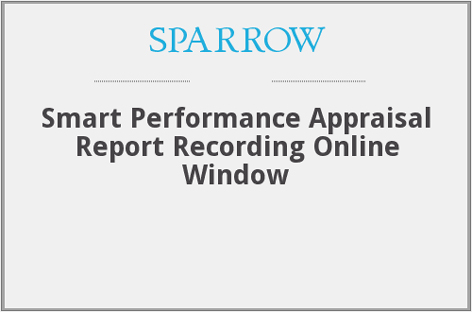 It is no literary satire, pun or scorn but all about the uncalled for response from majority of Administrative Secretaries, Directors, Managing Directors, District Development Commissioners, and other officers working in the administrative set up holding important positions and responsibilities towards Smart Performance Appraisal Report Recording Online Window (SPARROW) Platform. It may be recalled that the Department of Personnel and Training (DoPT) Government of India launched this window for online writing of Annual Performance Reports (APRs) of designated officers. The aim of this innovative method, based on modern technology, applied in personnel matters like appraising the performance of the eligible officers under this ‘window’ which is an important milestone in the digitisation programme and virtually paperless working and also giving a boost to levels of individual better performance by being duly recorded for appraisals at various higher levels. It is astonishing that even after three years of launching of SPARROW, Jammu and Kashmir Government could not implement the system due to total lackadaisical approach by the KAS officers. Can it be afforded to be waited for more time and why?
Having said the above as a prelude to the gamut of the importance of this online facility regarding the most sensitive personnel matters, as many as 980 officers of Jammu and Kashmir Administrative Service have failed to submit the requisite details for processing of their own Annual Performance Reports (APRs) on the portal of SPARROW. Only 290 officers have, perhaps, taken the requirements in the matter seriously and furnished the requisite information. It is indeed hard to comprehend that when the basic principle of remaining in service is to work or perform and what were the standards and the levels of the officers working and holding responsible positions where decision making process sets the tone of the working of the administration in a cumulative way, required to be appraised periodically, the concerned officers should extend no cooperation in that regard. It is equally surprising that despite reminders being issued by the General Administration Department , there appears to be no perceptible improvement in such an approach , if not in the mindset.
The concerned ‘defaulting’ officers are, otherwise, required to discharge such functions and duties in their departments etc where they have to enforce discipline and get the maximum output from their subordinate or junior staff members but when the ‘Bosses’ are found faltering in not adhering to the instructions from the higher authorities themselves especially in their own personnel matters, how could their juniors be expected to lend respectability to discipline and obeying their orders and instructions ? Still, not treating the flouting of instructions and disregarding reminders as misconduct and proceeding against such defaulter officers, but only a “serious note” having been taken by the Government and thus given a ‘grace period’ of few days for furnishing necessary details to the Government , to be more precise to General Administration Department (GAD) , denotes the level of leniency shown by the Government in the matter. Well, that gesture should have been appreciated and the needful done with notes appended as expressing regrets for the delay in submission of such important information.
Broadly speaking , self assessment or self appraisal exercise in respect of reviewing the overall performance of a review(ee) officer by the competent higher authority provides a window to the assess(ee ) officer to highlight his or her performance during the appraising period wherein one could list one’s achievements or special contribution which resulted in better results, as also how and in which circumstances, one could have further performed better had there been particular type of administrative or infrastructural support as also which areas one could not perform in better and due to which specific reasons. These all go towards providing enough inputs to the final reviewing authority in respect of an officer to decide better postings , responsibilities , elevations in cadre and powers etc.
The process contributes a lot towards better management of Personnel Information System and agreeably, all the mandatory inputs required for the system are not generally readily available with the General Administration Department, the members of the Jammu and Kashmir Administrative Service are, as a result, directed to submit the information in the standard formats within specific number of days but when there is quite casual approach from the concerned officers, it is totally unacceptable.