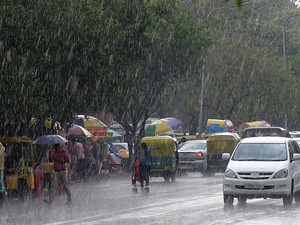 NEW DELHI: The southwest monsoon has weakened after remaining “very active” during the first half of June, a meteorological department official said today, adding it is expected to revive in the next five-six days.

The India Meteorological Department official said the “lull” in monsoon activity is normal.

The northern limit of the monsoon continues to pass through Thane (including Mumbai), Ahmednagar, Buldhana, Amravati, Gondia, Titlagarh, Cuttack, Midnapore, Goalpara and Baghdogra.

“The further advance of the southwest monsoon has weakened. It was very active until June 15, but there is a lull now. However, it expected to revive in the next five-six days,” IMD Additional Director-General Mritunjay Mohapatra said. (AGENCIES)