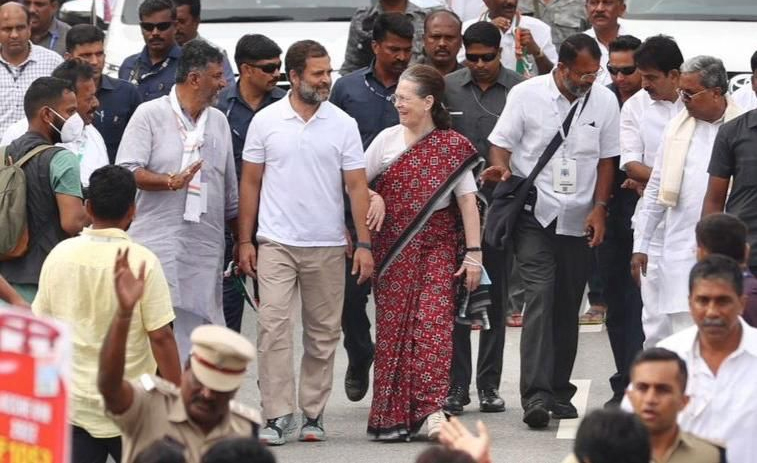 Pandavapura (KTK), Oct 6: Congress president Sonia Gandhi on Thursday joined the Bharat Jodo Yatra here, participating in a public event of the party after a long gap.
Amid cheers and slogan-shouting by party workers, Sonia Gandhi walked besides her son Rahul Gandhi and other leaders for a few kilometres in Mandya district of Karnataka.
A number of senior Congress leaders, including former chief minister Siddaramaiah and PCC president D K Shivakumar, walked along with the Gandhis.
Security personnel had a tough time controlling the crowds which jostled to get a glimpse of the Congress president.
This is the first time that Sonia Gandhi has joined a public event after recovering from COVID-19 earlier this year. The Congress president had contracted coronavirus twice and was also hospitalised.
Sonia Gandhi has not been electioneering or participating in public events of the party for a long time due to health reasons.
She had last participated in a roadshow in Varanasi in August 2016 where she sustained a shoulder injury and later underwent a surgery.
The 3,570 km long Bharat Jodo Yatra began from Kanyakumari on September 8. With the Yatra, the Congress said it wants to combat the alleged divisive politics of the BJP-led Central government. (Agencies)