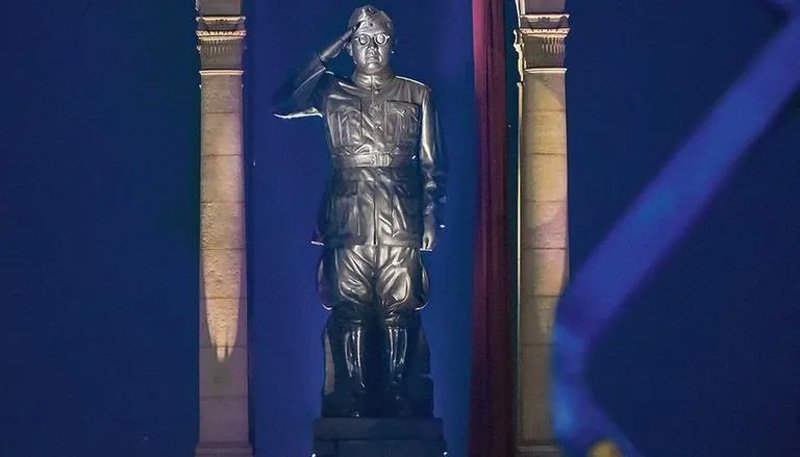 NEW DELHI, Sept 9:
Some of the toll plaza gates on highways had to be “temporarily dismantled” to allow passage to a 100-ft-long truck carrying the monolithic block of granite for the statue of Netaji Subhas Chandra Bose from Telangana to Delhi.
Rajat Mehta, director of Delhi-based Granite Studio India, which supplied the telephone black stone sourced from a quarry in Khammam in Telangana, said a “makeshift road” had to be built to move it from the quarry to a highway for transportation.
“It was a mammoth block of stone, weighing 280 metric tonnes (MT) and 32-ft-long. It was 11-ft-high and 8.5-ft-wide from which the image of Netaji was carved out. But bringing it to Delhi entailed a whole host of challenges,” he told PTI on Friday.
The granite monolith was chiselled to produce a statue of Bose which weighed 65 MT. Prime Minister Narendra Modi unveiled the statue of Bose, that sits in historic canopy in front of the India Gate here, on Thursday evening.
The massive truck was specially designed to carry the granite block from Telangana to the National Gallery of Modern Art (NGMA) here — a distance of 1,665 kilometres, the Culture Ministry earlier said.
“The stretch from the quarry to the national highway was ‘kuccha’ and a makeshift road had to be built in a short period of time to move the stone to the highway,” he said. As many as 42 tyres of the 100-ft-long truck burst on the way and 72 hours were lost due to this. The truck passed through five states to reach Delhi,” Mehta said.
A team of sculptors spent 26,000 man hours of “intense artistic endeavour” to carve the 28-ft-tall statue of Bose, according to the Ministry of Culture.
“While the statue’s carving was a labour of love itself, bringing it to Delhi was no easy feat. The truck was so huge that, at a couple of places, some of the toll plaza gates on highways had to be temporarily dismantled, where turns were sharp, so that the truck could negotiate it without the risk of hitting anything or anyone. All permissions had been taken from authorities for such work. In fact, police escorted the truck at many border areas knowing the significance of the monolithic block,” Mehta said.
The truck had four drivers, who took turns to drive it day and night, and “a pilot vehicle from our studio” accompanied it, he said.
“Another issue was that these huge trucks generally ply during night time when the road temperature is lower. But, as it travelled during day time too, many tyres got burst due to heat. As many as 42 tyres of the 100-ft-long truck burst on the way and 72 hours were lost due to this. The truck passed through five states to reach Delhi,” he said.
The truck left for Delhi on the night of May 22 and reached the national capital on June 2, Mehta said.
After reaching a National Highway, the truck travelled to Nagpur and passing through other parts of Maharashtra, it moved to Madhya Pradesh, Uttar Pradesh and then Faridabad, Haryana, and reached Delhi at the NGMA, he added.
The entire sculpture work was done at the NGMA. Raw stone block was brought from Khammam in Telangana, a senior official of the Culture Ministry said.
The statue is completely “hand sculpted using traditional techniques and modern tools”. The team of sculptors was led by Arun Yogiraj.
Mehta said even after reaching NGMA, the challenge was how to take the truck inside as NGMA’s gate is small.
“So, a portion of the iron fencing was removed to let the stone-laden truck in, and then the truck was dismantled to allow the monolithic block to be unloaded. The truck was reassembled outside the campus. The fence has been fitted again,” he said.
The prime minister had on January 21 assured that a grand statue of Netaji made of granite will be installed at India Gate as a symbol of the nation’s “indebtedness” to him.
As Modi unveiled the statue of Bose on Thursday evening, the tune of ‘Kadam Kadam Badhayeja’, the traditional song of the Indian National Army (INA), played in the background.
A group of people from Telangana who visited India Gate shortly before the unveiling ceremony said they felt “very happy and proud” that Netaji has been “brought to life” using a granite stone quarried from their home state.
Venkat T from Telangana’s Nizamabad area said, “I have come here before but the India Gate complex looks different today. And the fact that Netaji’s statue has been made out of a stone from Telengana is a matter of great pride for us”.
Venkat’s brother-in-law Shrikant K and sister-in-law Swarnlata K, who are visiting Delhi for the first time, said they did not know that the statue has been carved out of a stone from Telangana and said it is was a pleasant surprise for them. (PTI)