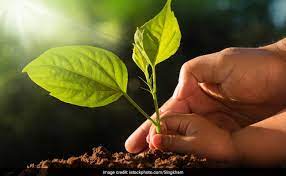 Dr. Vivak M Arya, Tamanna Sharma
“The nation that destroys its soil destroys itself” Franklin D. Roosevelt.
The quote by former US president and a great statesman give us an exact idea that soil is not only important for individual person to whom land belongs but is important for the growth and development of nation. Soil is a natural body consisting of layers (horizons) that are composed of weathered minerals, organic matter, air and water; it is a natural medium for the growth of plants (FAO).The importance of soil can be traced back to our Vedas. One of the quote from our vedas said “Upon this handful of soil our survival depends.

Husband it and it will grow our food, our fuel and our shelter and surround us with beauty. Abuse it and the soil will collapse and die, taking humanity with it.”Vedas Sanskrit scripture- 1500BC. It’s impossible to rank the importance of distinct soil functions because they are all important to our well-being in some way. However, supporting food and agriculture on a global scale is critical for the survival and growth of human life on this planet. Soil also supports plant growth and contributes to the maintenance of natural and planted vegetation, such as our diverse forests and grasslands, as well as the vast array of crop species and varieties that are cultivated or managed for a variety of food, fodder, fuel, and medicinal products. Soil also helps to support animal biodiversity above ground, such as wildlife and domesticated animals, by promoting plant development. Furthermore, the soil contains millions of different organisms that perform a variety of important functions such as breaking down plant debris, absorbing elements from the atmosphere, aerating the soil, and regulating carbon, nutrient, and hydrological cycles, as well as breaking down toxic elements. The importance of soil in determining the quality and availability of our water supply is becoming increasingly apparent.The preservation of the earth’s history and cultural legacy is dependent on soil.
Finally, soils have been identified as playing a critical role in modifying and ameliorating climate change risks and effects. Soil organic matter is one of the biosphere’s key carbon reservoirs, serving as both a driver and a response variable to climate change, capable of acting as both a source and sink of carbon. By keeping in view the above facts about importance of soil, the 68th session of the United Nations (UN) General Assembly adopted a resolution declaring 2015 the first-ever International Year of Soils.Also, every year on December 5th, World Soil Day (WSD) is commemorated to raise awareness about the importance of healthy soil and to advocate for the long- term sustainable management of soil resources. This year theme of world soil day “Halt soil salinization, boost soil productivity” aims to raise awareness on the importance of maintaining healthy ecosystems and human well-being by addressing growing challenges in soil management, combating soil salinization, increasing soil awareness, and encouraging societies to improve soil health.Soil salinization and sodification are key soil degradation processes that pose a threat to ecosystems and are widely acknowledged as one of the most pressing worldwide issues affecting agricultural production, food security, and sustainability in arid and semi-arid countries.According to estimates,there are more than 833 million hectares of salt-affected soils on the planet, (8.7 percent of the planet) (FAO, 2021).When evaporation surpasses precipitation and salts are not leached but remain in the upper soil layers in low-lying places, soluble salts accumulate in the soil. Soil salinization results from a combination of evaporation, salt precipitation and dissolution, salt transport, and ion exchange. The area under salt-affected soils in India is approximately 6.73 million hectare,with Gujarat (2.23 million ha), Uttar Pradesh (1.37 million ha), Maharashtra (0.61 million ha), West Bengal (0.44 million ha), and Rajasthan (0.38 million ha) accounting for nearly 75% of the country’s saline and sodic soils.Global economic losses due to soil salinization are estimated to be over $ 27.3 billion per year, according to estimates. In J&K, 1,75,00 hectares of land is salt affected. In our J&K, soil is subjected to various losses viz: water erosion, wind erosion and partly due to flooding and water logging and faulty management practices. The soil losses have been quantified in Shiwalik and concluded in an externally funded DST-GOI project that approximately 27 to 30 tons of soil is lost from one hector of land in a year. The need of the hour is to minimize the losses by adopting resource conservation modules developed and popularized by SKUAST-J. The simple and easiest way to control erosion is through planting vegetation. Erosion from barren land is more. Soil erosion can be controlled by various agro-engineering measures like cultivation along the contour, strip cropping, contour bunding, terracing etc Hopefully, by creating awareness we will able to protect soils which will boost our productivity and most importantly the sustainability of our planet. We conclude with a resolution that it’s the moral duty of very individual to protect the soil as envisioned in the sutra from Rig Veda Circa 350 BC “Rich in manure, rich in fruit”
(The authors are working in the field of NRM at SKUAST-J)