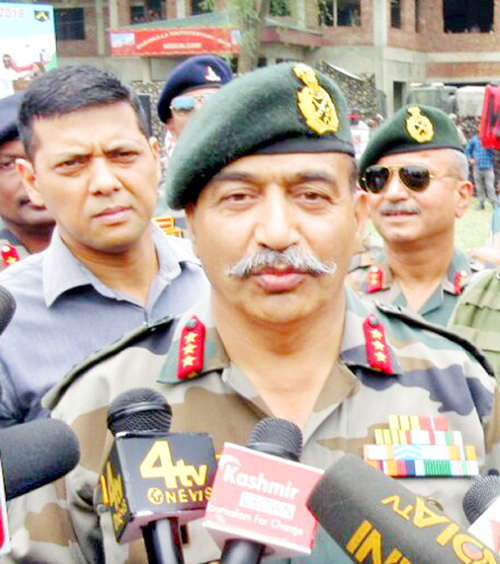 SRINAGAR, June 24: General Officer Commanding (GOC) of Srinagar based 15-Chinar Corps, Lt General A K Bhatt, today said that there is a small group of the ISIS in Kashmir who have no connections with the IS apart from the ideology.
Speaking to reporters on the sidelines of a function at Baramulla today, the GOC said: “As per our information there is a small group of ISIS who perhaps have ideological connection with the IS”.
Lt General Bhatt said that their leader along with his two associates has been killed and now only few are left. “Their leader Dawood who was of HMT Srinagar and his two associates were killed in Khiram bowl. Now there is a small group who has no backing from the IS. They have only ideological support and the IS is using name of the group only that it is connected to them”, he said.

The Army Commander said that there are only few militants operating in Srinagar city and hoped that they will be neutralized on hard Police intelligence input. “In Srinagar we have no knowledge about terrorists but few terrorists are operating there. On the hard intelligence of police, operations would be conducted in Srinagar and they will be neutralized”, he added.
The GOC said that the Home Ministry has taken a decision by sending NSG to Kashmir and once they come they will get deployed. “Some troops from NSG are coming and Home Ministry has taken a decision and some troops from the NSG will be deployed in Srinagar. So far they have not come and perhaps they are coming and whenever they will come then it will be known where they will operate”, he said.
Lt General Bhatt said that there are over 250 militants operating in Kashmir. “There are 250-275 militants operating in Kashmir valley”, he added.
The Corps Commander said that there are around 250 militants on the launch pads across the LoC in Pakistan occupied Kashmir waiting for infiltration. “We have information that there are around 250 militants on different launch pads, 25-30 of them on every launch pad, along the LoC opposite to our 19 and 28 Divisions of Army”, he said.
The GOC said that as compared to last few years the number of Jaish-e-Mohammad (JeM) militants operating in Kashmir is more and they are aiming for suicide attacks. “As compared to last few years, the number of Jaish militants is more this year. And Jaish is aiming at suicide attacks”, he said.
Lt General Bhatt, however, said that troops have been neutralizing their leadership and won’t allow their designs to succeed. “We have been neutralizing their leadership. Our effort will be not to allow them to succeed in their designs”, he said.