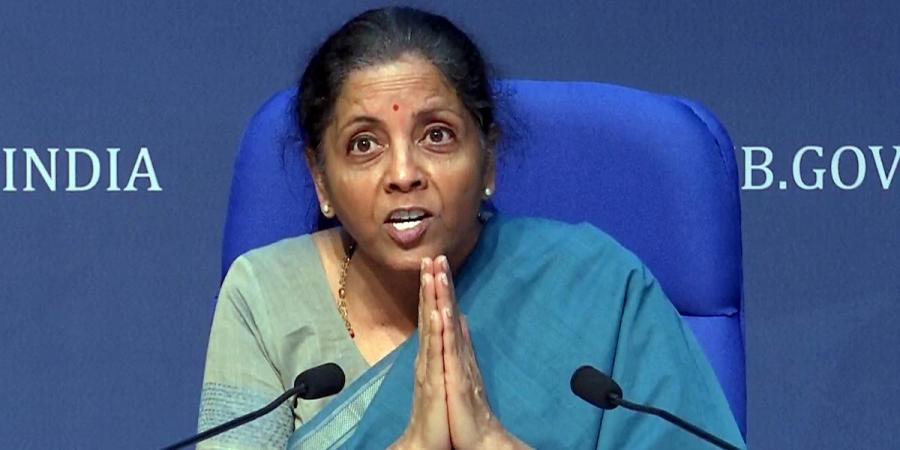 NEW DELHI, July 12: Finance Minister Nirmala Sitharaman reviewed implementation of Aatma Nirbhar Bharat Package of Rs 20 lakh crore-equivalent to 10 per cent of India’s GDP to fight COVID-19 pandemic in India, announced by Prime Minister Narendra Modi.
Sitharaman has laid down the details of the Special economic and comprehensive package announced on May 12 in a string of press conferences from May 13 to 17.
The Prime Minister had given a clarion call for Aatma Nirbhar Bharat or Self-Reliant India Movement. He also outlined five pillars of Aatma Nirbhar Bharat Economy, Infrastructure, System, Vibrant Demography and Demand.
The Ministries of Finance & Corporate Affairs have immediately started implementation of the announcements related to the Economic Package under Aatma Nirbhar Bharat Abhiyaan. Regular reviews and monitoring of the implementation of economic package is being overseen by the Finance Minister personally. In the latest review taken by Ms Sitharaman, she said Global tenders will be disallowed in Government procurement tenders up to Rs 200 crore.
Giving a major relief to the local MSMEs, Department of Expenditure has amended present the rules relating to Global Tenders. Now, no Global Tender Enquiry (GTE) shall be invited for tenders upto Rs 200 crore, unless prior approval is obtained from Cabinet Secretariat. It was announced by the Finance Minister that all central agencies like Railways, Ministry of Road Transport and Highways and CPWD will give extension of up to 6 months for completion of contractual obligations, including in respect of EPC and concession agreements.
In this regard, Department of Expenditure has issued instructions that (due to COVID-19 pandemic) on the invocation of Force Majeure Clause, contract period may be extended for a period not less than three months and not more than six months without imposition of any cost or penalty on the contractor/concessionaire.
Instructions were also issued to return the value of performance security to the contractor/ suppliers proportional to the supplies made or contract work completed to the total contract value. The same is being implemented by various Departments or Ministries.
The Finance Minister announced that the Centre has decided to accede to the request and increase borrowing limits of States from 3 per cent to 5 per cent, for 2020-21 only in view of the unprecedented situation. This will give States extra resources of Rs. 4.28 lakh crore.
In an effort to support the financial position of the State Governments presently suffering from stress on account of revenue losses due to lock down, Department of Expenditure issued a communication to all the State Governments for additional Borrowing of 2 per cent of projected GSDP to the States in 2020-21 subject to implementation of specific State Level Reforms.
To provide relief to the business, additional working capital finance of 20 per cent of the outstanding credit as on 29th February 2020, in the form of a Term Loan at a concessional rate of interest will be provided. This will be available to units with upto Rs 25 crore outstanding and turnover of up to Rs 100 crore whose accounts are standard.
The units will not have to provide any guarantee or collateral of their own. The amount will be 100per cent guaranteed by the Government of India providing a total liquidity of Rs. 3 lakh crore to more than 45 lakh MSMEs. After taking Cabinet approval on May 20, Department of Financial Services issued Operational Guidelines for the Scheme on May 23 and Emergency Credit Line Guarantee Scheme (ECLGS) Fund was registered on May 26. In a short period of about one-and-a-half months noticeable progress has been achieved in identifying units, sanctioning as well as disbursing of loans to MSMEs. Existing Partial Credit Guarantee Scheme (PCGS) will be revamped and extended to cover the borrowings of lower rated NBFCs, HFCs and other Micro Finance Institutions (MFIs). The Government will provide 20 per cent first loss sovereign guarantee to Public Sector Banks. After the Cabinet approval on PCGS, Operational Guidelines for the Scheme were issued on May 20 itself. Banks have approved purchase of portfolio of Rs. 14,000 crore and are currently in process of approval/negotiations for Rs 6,000 crore as on July 3.
New front loaded special refinance facility of Rs. 30,000 crore sanctioned by NABARD during COVID-19 to RRBs & Cooperative Banks. This special facility to benefit 3 crore farmers, consisting mostly small and marginal farmers in meeting their credit needs for post-harvest and kharif sowing requirements. When kharif sowing is already on its full swing Rs 24,876.87 crore out of Rs 30,000 crore has been disbursed as on July 6, out of this special facility.
The Department of Revenue has announced the reduction in TDS rates for specified payments to residents and specified TCS rates by 25 per cent for transactions made from May 14 to March 31, 2021. (PTI)
Between April 8 and June 30, the Central Board of Direct taxes (CBDT) has issued refunds in more than 20.44 lakh cases amounting to more than Rs 62,361 crore. Remaining refunds are under process. (PTI)

The Department also issued Notification that the due date for income-tax return for FY 2019-20 (Assessment Year 2020-21) has been extended from 31st July, 2020 (for individuals) and 31st October,2020 (for companies ) to 30th November, 2020. Further, the due date for furnishing of tax audit report has also been extended from existing 30th September, 2020 to 31st October, 2020.
The Department of Revenue has extended the time barring date for assessments getting barred by limitation on September 30, 2020 to March 31, 2021. In this regard, it has been already been communicated that making payment without additional amount under the ‘Vivad se Vishwas’ Scheme will be extended to 31st December, 2020 and the legislative amendments for the same in the Vivad Se Vishwas Act, 2020 (VsV Act) shall be moved in due course to time. Further, compliance dates mentioned under the VsV Act falling during period 20th March, 2020 to 30th December, 2020 have been extended to 31st December, 2020.
The Ministry of Corporate Affairs has raised the threshold of default under Section 4 of the IBC, 2016 to Rs 1 crore (from the existing threshold of Rs 1 lakh) i.e. in exercise of powers conferred under Section 4 of Insolvency & Bankruptcy Code, 2016 (31 of 2016), the Central Government hereby specified Rs 1 crore as the minimum amount of default for the purposes of the said section.
The Ministry of Corporate Affairs is finalising a special insolvency resolution under section 240A of the Code, to provide relief to the MSMEs and the same would be notified soon.
Insolvency and Bankruptcy Code (Amendment) Ordinance, 2020 has been promulgated on June 5 thereby provided for insertion of Section 10A in the Insolvency and Bankruptcy Code 2016 to temporarily suspend initiation of Corporate Insolvency Resolution Process (CIRP) under Section 7, 9 & 10 of the Code for a period of six months or such further period, not exceeding one year from such date.
After the Cabinet approval of the Special Liquidity Scheme for NBFCs/HFCs, the Scheme has been launched. RBI has also issued a circular to NBFCs and HFCs on July 1, 2020 itself on the Scheme. SBICAP has received 24 applications requesting about Rs 9,875 crore of financing as on July 7, 2020 which are being processed.
The first application in this regard has received its approval and the remaining are also being considered. (UNI)