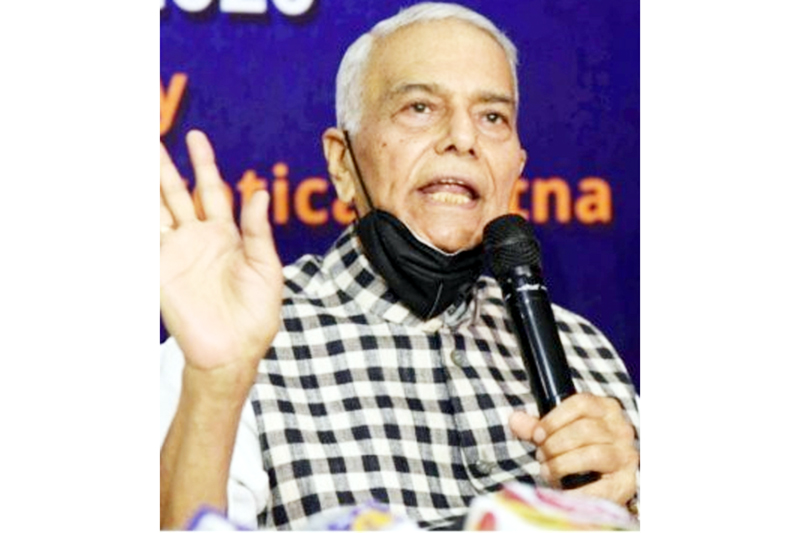 BENGALURU, July 3: Urging his rival, BJP-led NDA’s candidate for presidential polls, Droupadi Murmu to make an affirmation that she will not be a “rubber stamp Rashtrapati”, Yashwant Sinha, the joint candidate of opposition parties on Sunday expressed concerns about accusations being leveled against the judiciary.
Noting that filthiest accusations are being levelled against the judiciary, following certain observations made by it against the former spokesperson of the BJP- Nupur Sharma, he termed it as unprecedented, and a very sad development in India’s democracy.
The former Union Minister also accused the Central Government of misusing agencies like ED, CBI, Income Tax to fix political opponents.
Sinha, who is in Bengaluru as part of his poll campaign, attended the Congress Legislature Party meeting here, that was attended by Leader of Opposition in Rajya Sabha Mallikarjun Kharge, Congress Legislature Party leader Siddaramaiah, state party chief D K Shivakumar, host of party leaders and legislators.
Pointing out that two days ago the Supreme Court of India came out with certain observations against a former BJP spokesperson and subsequently the Chief Justice of India N V Ramana said at a function that the ‘Judiciary is answerable to the Constitution and Constitution alone’, he said, “I welcome this statement, this very firm and clear statement from the highest Court of the land and I congratulate the Chief Justice for making this assertion.”
“…Unfortunately after the Supreme Court made certain observations against the former spokesperson of the BJP, you and I are aware that in the social media the Judiciary has not only come in for criticism, it has come in for accusations, the filthiest accusations are being leveled against the judiciary, this is unprecedented, this is a very very sad development in our democracy,” he told reporters after the CLP meet.
“We all hold the judiciary in high esteem and we can’t say that we agree with one order of the judiciary, but we don’t accept another order of the judiciary,” Sinha further said.
The BJP was thrilled when the same judiciary passed an order on Ram Janmabhoomi and the whole country accepted it, because that order came from the judiciary, he pointed out and said “but today, if they (SC) are being critical of certain developments these people are going against the judiciary that is a very unwelcome, dangerous development in our democracy.”
Sinha, in response to a question said that he will not be meeting JD(S) patriarch and former Prime Minister H D Deve Gowda during this visit. The regional party has indicated about supporting his opponent Murmu, in the July 18 Presidential election.
Accusing the Central Government of misusing agencies like ED, CBI, Income Tax to fix political opponents, Sinha, reminding that he too has held some important posts in the Government said, “never before did it ever cross our mind that the agencies of the Government can and should be used against political opponents.”
“It has become a common practice now, any one from the opposition parties, who tries to raise his head or an issue is immediately issued a notice by one of these agencies,” he said, adding respectable leaders are being made to appear before the ED, not because it has relevant questions to ask, but because the Government wants to insult.
Sinha questioned “whether this is democracy?”, as he tried to highlight the alleged toppling of Governments recently in Maharashtra, and earlier in states like Karnataka, Madhya Pradesh, Goa, Arunachal Pradesh, by the BJP.
“If the ruling party at the Centre, uses its money power and misuses its governmental power to break parties, to insult the mandate of the people by bringing down elected Governments, then to us at least democracy is negated, it is assailed, it is attacked in a manner which is not acceptable,” he said.
He also condemned the BJP Government in Karnataka for attempting to communalise the minds of the young generation by introducing a new school curriculum “coloured by the ruling party’s ideological agenda”.
Stating that he has great personal regard for the candidate of the ruling party, Sinha however, urged Murmu to assure the people of India certain concerns, which he claimed are uppermost in their minds, in the prevailing grim circumstances in the country. “I have pledged that, if elected, I shall be answerable to the Constitution, and to the Constitution alone. I shall exercise my authority conscientiously, without fear or favour, whenever the executive or other institutions break the Constitutional checks and balances. Please make a similar pledge,” he told Murmu. (PTI)
“I have affirm that India needs a Rashtrapati who serves as the impartial Custodian of the Constitution — and not a silent or a rubber stamp Rashtrapati. Please make a similar affirmation,” he added.
Sinha also asked her to commit that she will have no hesitation to restrain the Central Government if it in any way aids and abets outrageously undemocratic practices like ‘Operation Kamal’, declare that she will speak out against any attempts aimed at communal polarisation of India, and announce that she will defend the Freedom of Press, Freedom of Speech and other rights and freedoms the Constitution grants. (PTI)