E-Paper
Home National Sinha says he is ‘closest’ person who can deliver on creation of... 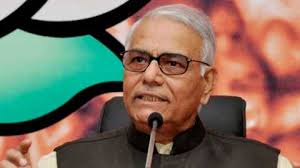 NEW DELHI, Jan 21: Former BJP leader Yashwant Sinha threw his hat in the race for prime ministership on Monday when he declared himself as the “closest” person who could deliver on job creation, building roads, townships and industries.
Sinha, a former finance minister during the Atal Bihari Vajpayee-led previous NDA government, also said that Transport Minister Nitin Gadkari would not succeed Prime Minister Narendra Modi as he and BJP chief Amit Shah will “not retire” even if the BJP fell below the 200-seat mark in 2019 Lok Sabha polls.
The former BJP lawmaker said the problem in the country was non-creation of crores of jobs and millions of kilometres of roads. India needs a leader who can make agriculture profitable and set up irrigation projects, townships and industries, he said.
“We have to do a lot of work in this country… We will have to find somebody who is prepared to buy this theory and start doing it,” he said.
Asked who the person could be, Sinha told NDTV, “There is nobody in my mind.”
Asked who was closest to deliver all this, he said, “The closest is me, myself, what I am,” leading to a laughter in the audience of the event hosted by the channel.
“I am very close behind him,” said CPI(M) leader Sitaram Yechury, seated next to him, when asked if he endorsed Sinha.
Various opposition parties are seeking to unite to put up a united front to defeat the Modi-led BJP in general elections, with the BJP taking a swipe at them saying all are prime ministerial aspirants in the opposition camp.
About speculation on whether Gadkari would succeed Modi, the disgruntled former BJP MP said, “There is no hope in hell for that.”
Sinha said what he is saying is “because I know the kind of vice-like grip the current prime minister and the party president have over the BJP and even after the loss in elections where they could be below 200, they will not retire from their leadership.”
“It is a very fond hope that some media people are nursing that Gadkari might succeed Modi,” he said, negating the possibility. (PTI)