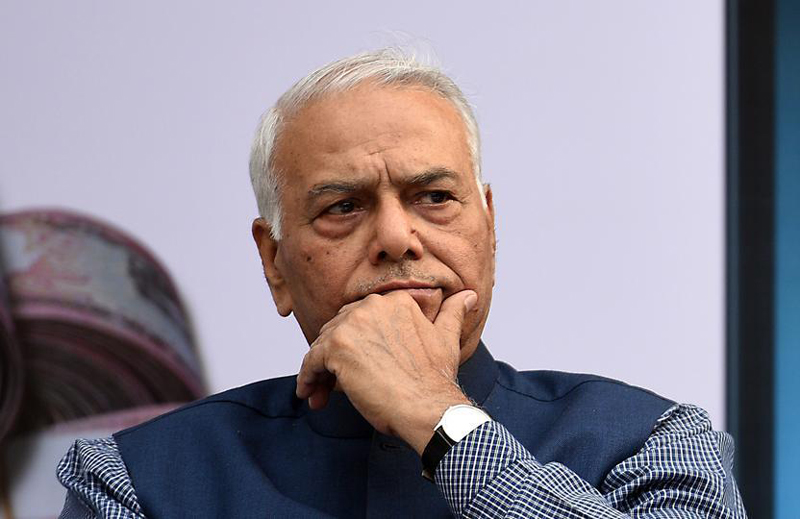 Srinagar, Sept 17: Former Union Finance Minister, Yashwant Sinha, was not allowed to visit Kashmir today and was sent back from Srinagar Airport as he was leading a four-member civil society group to take stock of the situation in Kashmir 44 days after abrogation of Article 370.
The four member delegation of Civil Society -Concerned Citizens Group- led by Yashwant Sinha comprised former newspaper editor Bharat Bushan, social activist and Executive Director Central for Dialogue and Reconciliation Sushoba Bharvae and former Vice Air Martial Kapil Kak.
Sinha was not allowed to leave the airport as soon as he along with other members of the group landed at Srinagar Airport at around 11.50 am. The other members were, however, allowed to proceed towards Srinagar but Sinha was barred. “They asked us you are free to go but stopped Yashwant Sinha”, said Bharat.
Deputy Commissioner Budgam Tariq Hussain Ganai served him a notice in which he was told that he is not allowed to leave the premises of the airport as his visit may disrupt peace in the Valley.
“It has come to my notice that Yashwant Sinha is visiting Kashmir valley today i.e. 17th September 2019. Whereas there are credible inputs from various agencies that visit of Sinha may have adverse effect on law and order situation in the district which so far has remained peaceful”, read the notice.
“There is every possibility that if Sinha is allowed to move beyound the arrival lounge of Srinagar Airport there can be disturbance of peace and tranquility in the district. Now I District Magistrate exercise powers under Section 144 CrPC to impose restriction on movement of Sihna beyond airport lounge for maintainance of peace and tranquility”, the notice said.
Sinha and other members of the group refused to leave the airport and were insisting that former Finance Minister may be allowed to visit Kashmir. This led to chaotic situation at the airport as Sinha was insisting that he will stay at Srinagar Airport for the night.
However, in the evening he was served another notice by the Senior Superintendent of Police, Budgam asking him that he can’t stay at the airport.
“The international Airport has no paid lounge for night stay. In this situation you are advised to immediately leave the airport and take the flight back. The district administration will arrange for your return journey”, the notice said.
After waiting for five hours at the airport, he was finally boarded in last Srinagar-Delhi flight at around 4.45 pm. The other members later visited Srinagar where they are likely to meet people before leaving for New Delhi tomorrow.