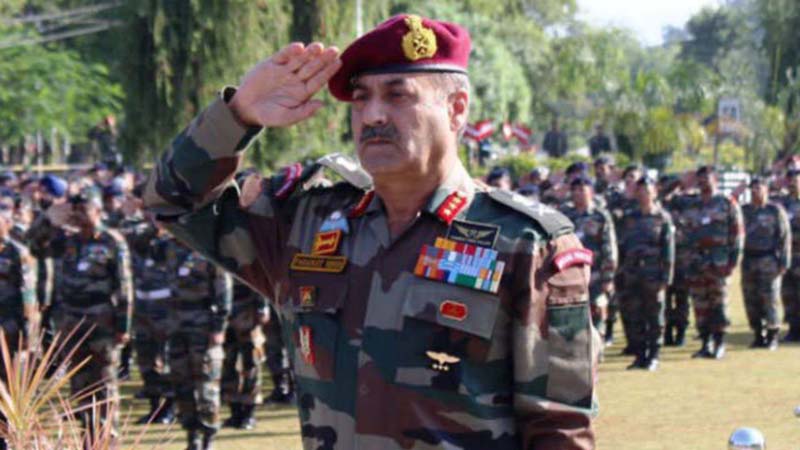 JAMMU, July 27: In a major reshuffle in top echelons of the Army, Lt Gen Ravindra Pal Singh has been posted as new General Officer Commanding-in-Chief (GOC-in-C) Western Command, which looks after entire International Border in Jammu region spread over three districts of Jammu, Samba and Kathua while General Officer Commander (GOC), Nagrota-based 16 Headquarters, Lt Gen Paramjit Singh is likely to be the new Director General of Military Operations (DGMO) replacing Lt Gen Anil Chauhan.
Official sources told the Excelsior that Lt Gen Ravinder Pal Singh, who was currently posted as GOC Bhopal-based 21 Corps, has been appointed as GOC-in-C Western Command in place of Lt Gen Surinder Singh, who is retiring from the services on July 31 after three-year term.
The Western Command has very strategic role as it controls the International Border in Jammu as well as Punjab with Pakistan. While the International Border in Punjab generally remains calm, it is activated quite often in Jammu, Samba and Kathua districts by Pakistan with ceasefire violations.
However, the Border Security Force (BSF) remains the frontline force on the International Border.
Lt Gen A S Kler has been appointed as the GOC-in-C South Western Command. He had earlier commanded the Ambala-headquartered 2 Corps and is currently serving as Director General Military Training. He has also served as Chief of Staff of Shimla-based Army Training Command (ARTRAC).
GOC Nagrota-based 16 Corps, Lt Gen Paramjit Singh is all set to be posted as new Director General of Military Operations in New Delhi in place of Lt Gen Anil Chauhan.
Lt Gen Chauhan is likely to be posted as GOC-in-C Eastern Command, sources said.
Few names were under consideration for posting as successor of Lt Gen Paramjit Singh as GOC White Knight Corps, Nagrota, which looks after strategically very significant twin border districts of Rajouri and Poonch, which shared vast Line of Control (LoC) with Pakistan, besides erstwhile Doda district and surroundings.
The successor of Lt Gen Paramjit Singh will be named before he is designated as the new DGMO, according to sources.
Northern Command chief Lt Gen Ranbir Singh had served as DGMO during September 2016 surgical strikes conducted by the Indian Army in Pakistan in the aftermath of Uri terror attack. Lt Gen AK Bhatt, who had replaced Lt Gen Ranbir Singh as DGMO, was later posted as General Officer Commanding of Srinagar based 15 Corps. Now, the GOC of Nagrota Corps is tipped to be the DGMO.
As DGMO, Lt Gen Singh will oversee various operations of the Indian Army including along the LoC in Jammu and Kashmir. He has extensive experience of counter-terror operations and was involved in the planning of the 2016 surgical strikes on terror launch pads across the Line of Control in Jammu and Kashmir.
An alumnus of Defence Services Staff College, Wellington and Mhow-based Army War College, Lt Gen Singh has held various operational and staff positions in the Army in Kashmir valley.
He has vast experience in high-altitude warfare, including tenure at the Siachen Glacier. He spent most of his career conducting counter insurgency operations in Jammu and Kashmir, besides taking part in operations against the LTTE in Sri Lanka.
Lt Gen Singh was commissioned into the Army in 1982 in Madras Regiment and he was shifted to the elite Parachute Regiment (Special Forces) in January 1984.
Only couple of days back, the Government was reported to have cleared the appointment of Lt Gen MM Naravane as new Vice Chief of Army in place of Lt Gen Devraj Anbu, who is retiring on August 31.
Lt Gen Anbu was earlier posted as the Northern Command chief before being replaced by Lt Gen Ranbir Singh.
Lt Gen Naravane was currently posted as GOC-in-C Eastern Command.