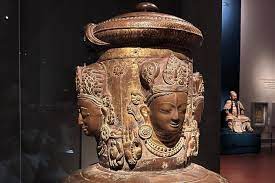 Singapore, Aug 17: A nearly 400-year-old religious artefact allegedly stolen from Nepal and tracked down to Singapore recently was acquired in accordance with “established procedures” both local and international, according to a media report here on Wednesday.
“The object in the reports refers to a copper cover of a linga, which was acquired by ACM (Asian Civilisation Museum of Singapore) in 2015 in accordance with the (city state’s NHB) National Heritage Board’s established procedures on the acquisition,” the Channel News Asia quoted ACM spokesman as saying on Wednesday.
On Sunday, Lost Arts of Nepal, an online initiative to recover lost artistic heritage from Nepal announced that a sculpture of a Hindu deity belonging to the Neel Barahi temple – dated 1636 and claimed as stolen in 1999 – had been “located in the collection of the Asian Civilisations Museum (ACM), Singapore”.
The post by the Lost Arts of Nepal Facebook page was picked up by multiple Nepalese media outlets which referred to the four-sided artefact as an “icon of great archaeological importance”.
The ACM was aware of the media reports, said its spokesman.
The NHB procedures include an evaluation by ACM’s acquisition committee made up of external experts, as well as rigorous provenance checks carried out at the time of purchase, according to the report.
These provenances – or ownership record – checks are also benchmarked against international practices and regularly reviewed, added the spokesperson.
“ACM further notes that the object is not listed in the Art Loss Register,” he said, referring to the world’s largest private database of looted art.
A linga is the phallic and cosmic pillar symbol of the Hindu god Shiva, according to a caption below the Neel Barahi exhibit, which the Channel is located in ACM’s Ancient Religions gallery.
But the administrator of Lost Arts of Nepal – who requested to remain anonymous – told the Channel that the 386-year-old artefact was instead used, along with six others, to represent shrines to mother goddesses in the Nepalese town of Pharping, some 20km south of capital Kathmandu.
The seven deities feature in an annual, centuries-old holy festival in Pharping but four of the original pieces have gone missing and have been replaced with replicas since.
The Neel Barahi sculpture, in particular, was stolen on the night of June 16, 1999, from the house of a caretaker who had been tasked to keep it safe for the year, said the person behind Lost Arts of Nepal.
“We don’t know who stole it but the reason is (likely) increasing demand for Nepalese art and huge financial gains,” the Singapore Channel had the activist as saying.
The campaigning group said the Neel Barahi would have travelled through various hands before reaching the ACM in Singapore, though its history of ownership is unclear.
The sculpture is distinctive for having a missing hand on one side, says Lost Arts of Nepal, an online initiative seeking to recover lost or stolen heritage from Nepal.
In 2019, Lost Arts of Nepal first got wind of the Neel Barahi being in ACM’s collection and subsequently spotted the artefact in the background of a photo of another exhibit.
According to the Channel report, the group has raised the matter to the Nepal Heritage Recovery Campaign, an organisation also working to restitute(restore) stolen heritage pieces from the country.
The Nepal Heritage Recovery Campaign will in turn work with the Department of Archaeology within the Nepal government to communicate with Singapore’s ACM “via diplomatic channels”.
“We are convinced that we can prove the stolen deity belongs to the community of Pharping,” said Lost Arts of Nepal.
“It’s not just a piece of art displayed in a museum gallery; it’s our ancestors, our guardians, our faith.”
In 2015, the ACM returned to Indian authorities an 11th-century bronze sculpture believed to have been illegally removed from the country.
ACM had purchased the sculpture – depicting a Hindu goddess – in 2007 for USD 650,000 from a defunct New York gallery accused of an extensive antiquities-smuggling operation. (PTI)