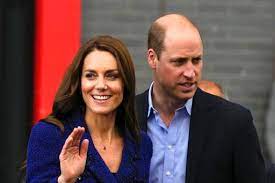 London, Nov 28:Prince William and the Princess of Wales will be looking to focus attention on their Earthshot Prize for environmental innovators when they make their first visit to the U.S. In eight years this week, a trip likely to be dogged by tensions with Prince Harry and his wife, Meghan, who have criticised Britain’s royal family in the American media.
William and his wife, Catherine, will travel to Boston on Wednesday for three days of public engagements before announcing the prize winners on Friday.
Boston, birthplace of John F. Kennedy, was chosen to host the second annual prize ceremony because the late president’s 1962 “moonshot” speech — setting the challenge for Americans to reach the moon by the end of the decade — inspired the prince and his partners to set a similar goal for finding solutions to climate change and other environmental problems by 2030.
The first Earthshot Prizes were awarded last year in London just before the U.K. Hosted the COP26 climate conference.
But as much as the royals try to focus on the prize, William is likely to face questions about Harry and Meghan, who have criticised the royal family for racism and insensitive treatment in interviews with Oprah Winfrey and other U.S. Media.
The Netflix series “The Crown” has also resurrected some of the more troubled times of the House of Windsor just as the royal family tries to show that it remains relevant in modern, multicultural Britain following the death of Queen Elizabeth II.
“You could say that the royal family, particularly as far as America is concerned, have had a bit of a bumpy ride of late,” said Joe Little, the managing editor of Majesty Magazine.
“They’ve come in for huge amounts of criticism on the back of The Crown’ and also the Oprah Winfrey interview, which has not particularly reflected well on the House of Windsor, so I think it’s a good opportunity whilst they’re in the U.S. … to sort of redress the balance if at all possible.”
Whatever those efforts are, they will take place in and around Boston, where William and Kate will remain for their entire visit.
The royal couple will keep the focus on environmental issues, meeting with local organisations responding to rising sea levels in Boston and visiting Greentown Labs in Somerville, Massachusetts, an incubator hub where local entrepreneurs are working on projects to combat climate change.
But they will also address broader issues, using their star power to highlight the work of Roca Inc., which tries to improve the lives of young people by addressing issues such as racism, poverty and incarceration.
They will also visit Harvard University’s Centre on the Developing Child, a leader on research into the long-term impact of early childhood experiences.
William and Kate will also meet with Boston Mayor Michelle Wu and visit the John F. Kennedy Memorial Library and Museum with the late president’s daughter, Caroline Kennedy.
“The Prince and Princess are looking forward to spending time in Boston, and to learning more about the issues that are affecting local people, as well as to celebrating the incredible climate solutions that will be spotlighted through the Earthshot Prize,” their Kensington Palace office said in a statement.
Earthshot offers 1 million pounds ($1.2 million) in prize money to the winners of five separate categories: nature protection, clean air, ocean revival, waste elimination and climate change. The winners and all 15 finalists also receive help in expanding their projects to meet global demand.
Among the finalists is a startup from Kenya that aims to provide cleaner-burning stoves to make cooking safer and reduce indoor air pollution.
It was the brainwave of Charlot Magayi, who grew up in one of Nairobi’s largest slums and sold charcoal for fuel.
When her daughter was severely burned by a charcoal-fired stove in 2012, she developed a stove that uses a safer fuel made from a combination of charcoal, wood and sugarcane.
The stoves cut costs for users, reduce toxic emissions and lower the risk of burns, Magayi says.
Other finalists include Fleather, a project in India that creates an alternative to leather out of floral waste; Hutan, an effort to protect orangutans in Malaysia; and SeaForester, which seeks to restore kelp forests that capture carbon and promote biodiversity.
The winners will be announced Friday at Boston’s MGM Music Hall as part of a glitzy show headlined by Billie Eilish, Annie Lennox, Ellie Goulding and Chloe x Halle.
It will include video narrated by naturalist David Attenborough and actor Cate Blanchett.
Prizes will be presented by actor Rami Malek, comedian Catherine O’Hara, and actor and activist Shailene Woodley. The show will be co-hosted by the BBC’s Clara Amfo and American actor and producer Daniel Dae Kim.
The ceremony will be broadcast Sunday on the BBC in the U.K., PBS in the U.S. And Multichoice across Africa. (AP)