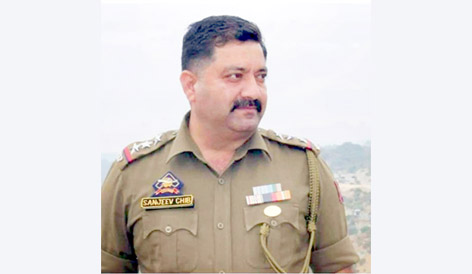 Excelsior Correspondent
JAMMU, May 27: SHO Lakhanpur Inspector Sanjeev Chib has spent Rs 1.30 lakh from his pocket to purchase green grass for cows and biscuits and milk for stray dogs and other animals during lockdown in Kathua and Lakhanpur areas.
Still, the SHO and his team are making all out efforts to feed cows, dogs and other stray animals.
Chib and his team can be seen feeding green grass to cows, horses and other animals in the morning and biscuits and milk to stray dogs in the night.
The Kathua Police has lauded the efforts of Inspector Chib and his team.
Chib was earlier posted as SHO Kathua and presently he is SHO Lakhanpur.
Earlier, Union Minister of State in the Prime Minister’s Office (PMO) Dr Jitendra Singh had also tweeted a photograph of Chib feeding cows and lauded his efforts.

BJP busy in celebrations, public suffering on all counts: Bhalla

People up in arms against PDD over erratic power supply