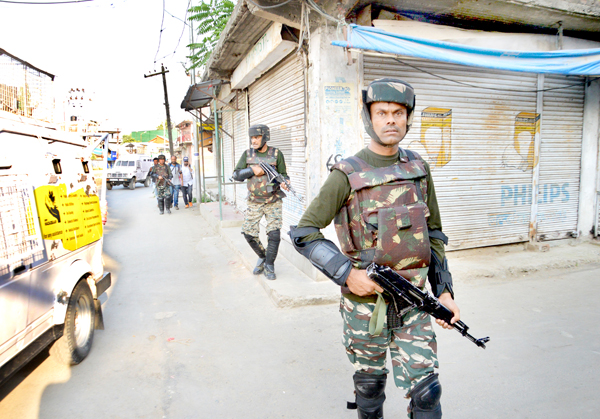 Fayaz Bukhari
SRINAGAR, June 4: At least 23 people including a police officer were injured in two separate grenade attacks in South Kashmir today.
At least 16 persons were injured in a grenade attack on a police party at Batapora village in South Kashmir district of Shopian today. The grenade exploded on the road injuring 4 cops including SHO of the police station and 12 civilians.
The injured policemen have been identified as Inspector Gulzar Ahmad, SHO Police Station Shopian, Constable Altaf Ahmad, Constable Javid Ahmad and Nazir Ahmad.
The civilians injured in the grenade attack include two women Farida wife of Nazir Ahmad and Nadiya daughter of Nazir Ahmad. They were referred to District Hospital Shopian where from they were shifted to Srinagar’s SMHS Hospital for further treatment. Both the injured women are from Shopian’s Sedow area.

Click here to watch video
Security forces immediately cordoned off the area and conducted searches against the militants responsible for the attack. However, no one was arrested.
Four paramilitary CRPF personnel and three civilians were injured as militants lobbed a grenade in Tahab, Pulwama in South Kashmir on a CRPF vehicle. The injured persons including the CRPF men as well as the civilians are said to be stable.
Militants targeted the vehicle of 182 Battalion of CRPF injuring four CRPF men who have been  identified as Assistant Commandant Anju Patik, constables Sumit Kumar, Sunbir Singh and Suresh Kumar.
The civilians, who have been injured were identified as Shuguta Jan, 27, of Litter Pulwama, Fiza Jan, 12, resident of Washbugh, Pulwama and Arshad Ahmad Pathan, resident of Pathan Pulwama.
Meanwhile, police detected an IED on Nathipora- Wadoora area of Sopore in North Kashmir’s Baramulla district today.
Police said that the security forces detected an IED placed on roadside by militants in the area. “The IED after being detected was defused immediately by Bomb Disposal Squad (BDS) without causing any damage,” police said.
And villagers in North Kashmir’s Bandipora district of Hajin area foiled an attempt by gunmen to abduct a man last night.
The incident took place at Hajin village when masked men tried to kidnap Shahid Ahmad Khan, 25, son of Habibullah Khan, a resident of Chrengpora Banyari village of Hajin.
Police blamed militants for recent abductions and killings in Hajin but militants denied their hand in civilians’ killings in the town.