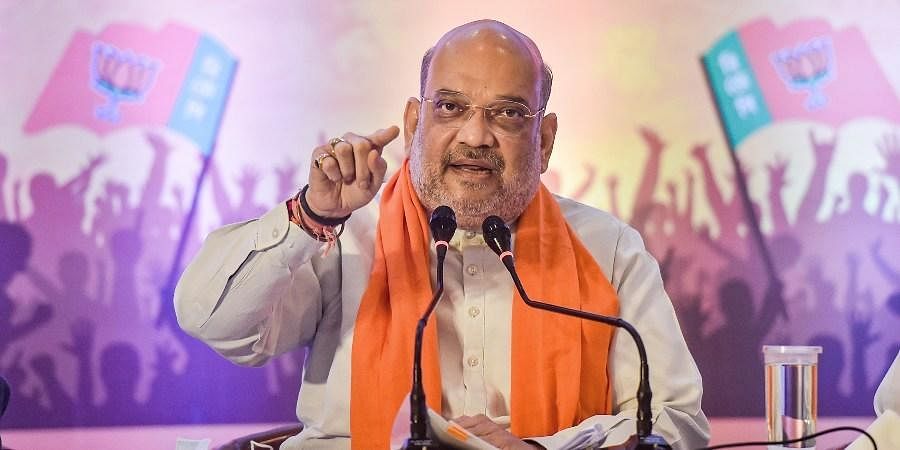 Avtar Bhat
JAMMU, Oct 15: Union Home Minister, Amit Shah who will be on four days visit to Jammu and Kashmir UT beginning from October 22 to assess the security and prevailing law and order situation in J&K following the spurt of terrorist violence, will address a mammoth public rally at Jammu on October 24.
Sources said, BJP is giving a huge publicity to the rally and party intends a big crowd to participate in the rally as the Home Minister is visiting the UT for the first time after annulling of Articles 370 and 35 -A in 2019 and converting the erstwhile State into two UTs of J&K and Ladakh.
Sources said the Home Minister during the rally will also be felicitated by West Pak refugees, Balmiki Samaj and Gorkhas who got citizenship rights after 70 years of Independence in J&K. Besides, the PoJK refugees will also felicitate him.
Meanwhile, a handout issued by BJP also said that Shah will address a huge public rally in Jammu on October 24 at ground adjoining 4th Bridge, Bhagwati Nagar. BJP UT president, Ravinder Raina who convened a meeting at BJP headquarter, Trikuta Nagar, to discuss the tour programme of Home Minister informed this to his party colleagues.
The meeting was attended by BJP general secretaries, Vibodh Gupta (former MLC) & Dr. Devinder Kumar Manyal (former Minister) and BJP headquarter Incharge Priya Sethi and Mayor JMC, Chander Mohan Gupta.
Ravinder Raina, while addressing the meeting said that Union Minister Amit Shah will address a huge public rally in Jammu on 24th October. He emphasized that Union Minister is going to address first public rally in Jammu after the abrogation of controversial Articles 370 & 35(A) and long sought practical integration of Jammu & Kashmir with the rest of India. He said that only Prime Minister, Narendra Modi with the charismatic companionship of Amit Shah could do this justice with the erstwhile State of Jammu & Kashmir and its residents. “Now this is the time that we show Amit Shah that how much we are grateful to him and PM Modi for this wonderful decision”, he added.
Ravinder Raina, on the occasion also formed teams and allotted different responsibilities to the senior party leaders for the successful conduct of the public rally. He said that the rally should be organized in such a professional manner that no inconvenience is caused to the visiting gathering as well as the nearby dwellers and commuters.
BJP vice-president, Yudhvir Sethi, secretary Arvind Gupta, treasurer Prabhat Singh Jamwal, Munish Sharma, Tilak Raj Gupta, Dr. Pardeep Mahotra, Sanjay Khanna, Prof. Gharu Ram, Arun Jamwal, Sanjita Dogra, Sanjay Baru, Pramod Kapahi, Ayodhya Gupta, Munish Khajuria, Brahmjyot Sati, Jugal Kishore Gupta, Naresh Jasrotia, Gourav Pargal and other senior party leaders participated in the meeting.
Sources said the Home Minister, who will return to Union Capital on October 25 will likely hold closed door meeting with BJP Core Committee members and senior office bearers of the party and discuss the prevailing situation in the UT with them viz a viz party’s preparedness for the forthcoming Assembly elections which are likely to be held next year.
Sources said the Home Minister during his four days visit to J&K will reach capital city of Srinagar on October 22 and after two days stay in Kashmir i.e on October 22 and 23, he will review the security measures with top brass of Army, BSF,CRPF and J&K Police besides, the LG and UT administration. The recent spurt of terrorist violence in the Valley and measures to quell it will also be discussed to restore the confidence of common man especially the minorities who feel threatened after the recent incidents of terrorist attacks and selective killings.
Sources said, Shah’s visit will also be a morale boosting for the BJP activists in Kashmir and he will hold meetings with party representatives as well as senior functionaries in the Valley too and seek complete feedback on prevailing situation in Kashmir from them.
Sources, however, said the tour programme and last minute change in Home Minister’s schedule will be conveyed to party on October 21 i.e. one day prior to his visit to the UT.