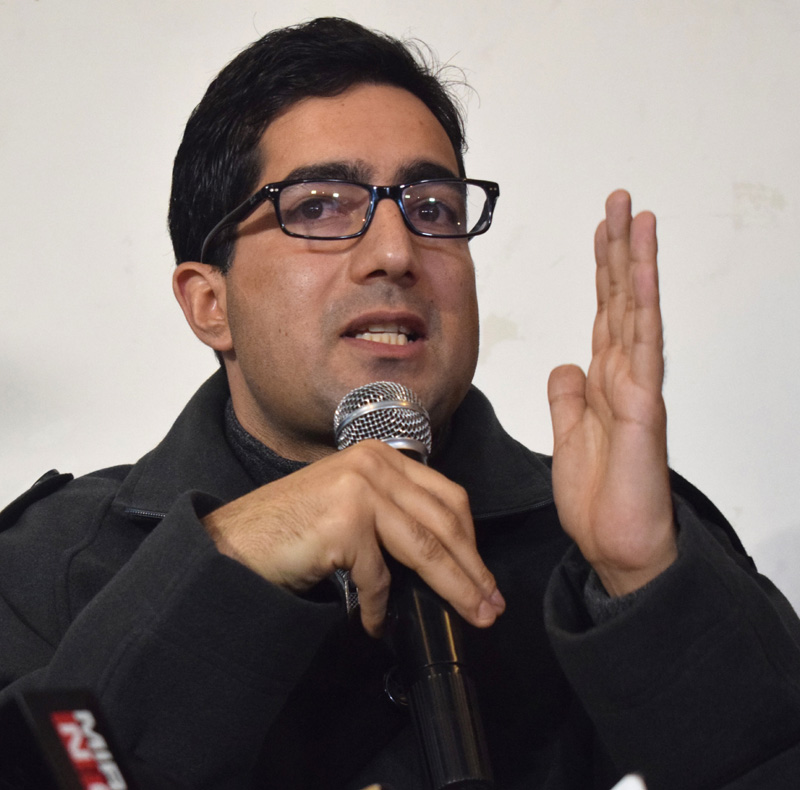 SRINAGAR, Jan 11: Former IAS officer Shah Faesal, who quit the service recently, today shared his future plans, saying he would not join any mainstream political parties “as of now”, or separatist Hurriyat Conference, but would be happy to contest the upcoming parliamentary elections.
Click here to watch video
“As of now, I do not have any plans to join any existing mainstream political party. I plan to go to the field, listen to the ground, to the youngsters and important stakeholders and then take a decision,” he told reporters here.
“I am deeply inspired by Imran Khan and Arvind Kejriwal. But, we know we are operating in a conflict zone and it is not very easy for us to work in that space, a space which has lost legitimacy in last few years.
“I wish if the youngsters of the State give me that kind of opportunity, I will be happy to do a retake of Imran Khan and Kejriwal,” Faesal added.
He said he would be holding consultations with all stakeholders including political parties before taking the next step. “In Kashmir, we need to come together. We are in a crisis situation. It is not time to do politics on the graves of the people.”
Asked if he would be contesting the elections, Faesal said, “I will be happy to contest the upcoming elections. In fact, I believe parliament and legislature are important space and we need well-meaning and right people there.”
He said that in the recent years, due to the “delegitimising” of the electoral politics because of the way it has been conducted, youths are not attracted to it. “We need to change that. I wish to use Parliament for engagement, for bringing solutions to our problems.”
On a question about the possibility of him joining the Hurriyat, Faesal said he would not do so as he cannot put to use his expertise in that forum.
“I am a man from the system and I have an experience and my specialisation is in governance… I will be happy to do something in the institutions where I can use my experience as an administrator. I wish I could do that elsewhere as well, but because the Hurriyat does not give me that kind of opportunity, very rightly because Hurriyat does not believe in electoral politics. So, I think at this moment I may not be able to do that,” he said.
However, he said it was wrong to assume the Hurriyat has no role in achieving resolution of the Kashmir problem.
He also said phrases like ‘azaadi’, right to self-determination and plebiscite should not be seen as taboo words in the mainstream politics.
“We have this political discourse and there are certain taboo words … We should not talk about azaadi, we should not talk about plebiscite… All these, which are not actually taboo words.”
“Let the mainstream politics actually open its eyes to that vocabulary and re-imagine,” he said.
“We have got politicians to deal with municipal problems and military to deal with political problem. I think that is a problem itself. We need to open the space for the politicians and leave other things to those who need to be doing it,” he added.