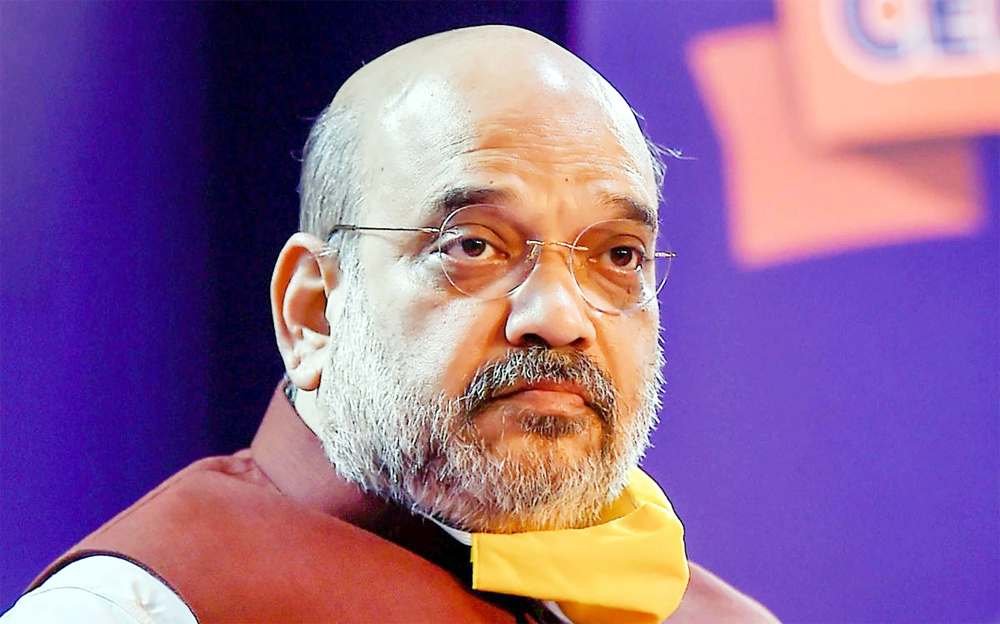 Holds meeting with BJP Core Group
Avtar Bhat
JAMMU, Oct 4: Union Home Minister, Amit Shah today asked his party men to be ready for Assembly elections in the Union Territory of J&K which can be held at any time in near future.
Addressing a BJP Core Group meeting here during his three days visit to J&K, Shah said that Modi Government has taken many drastic and revolutionary steps for development of J&K and upliftment of people of the UT so it is the duty of the partymen to apprise the people of these developments which can have cascading effects on the future of the UT and its people.
“The Government (Sarkar) has done its job and it is now up to the party men to strengthen the organization and take party’s message to every nook and corner of the UT”, he said.
The Core Group meeting was attended by national general Secretary, BJP in charge J&K and Ladakh, UTs ,Tarun Chugh, Union Minister, Dr Jitendra Singh, BJP J&K UT president Ravinder Raina, co incharge J&K, Ashish Sood, MP Jugal Kishore Sharma, BJP general secretary (Org), Ashok Koul, former Deputy CMs, Dr Nirmal Singh and Kavinder Gupta, former Minister, Sat Sharma, general secretary BJP, Dr D K Manyal, party vice president, Shakti Raj Parihar and senior party leader, Devender Singh Rana.
Shah as per sources, has told partymen that they should apprise the masses about the benefits of Article 370 abrogation which is a historical development and was the root cause of J&K’s underdevelopment and backwardness.
Sources said, while asking BJP leaders to intensify their activities in entire UT by holding mass contact programmes and rallies, without referring to rival political parties who ruled the erstwhile State since 1947 warned that those responsible for present mess in J&K and were part of problem can’t be made the part of solution anymore.
Sources said during the meeting the Home Minister in unequivocal terms said that there are no ties of BJP with National Conference (NC) and termed the statements of some NC activists and leaders totally rubbish in this regard.
When some party leaders told him that NC is claiming that they are part of Narendra Modi’s mission, he retorted “How can those be part of solution when they are part of problem”?
He informed the party leaders that election process is on and they have to gear up for the polls. He also made it clear that by providing reservation to Paharis no other group will be deprived of its rights as BJP’s commitment is Sabka Sath and Sabka Vikas. “We want to take all communities and regions together and no one should feel discriminated or let down under Modi rule”, he added.
The BJP leaders raised various issues concerning the people of UT including amnesty in power bills, issues of industry, etc, refugees and Kashmiri migrants especially employees working in Valley.
However, the Home Minister informed the party leaders that they have to make people understand what Modi Government has practically done for them by taking on those dynasties which had looted the resources of the UT for decades together. He while highlighting the Government’s achievements said that things are by and by improving for better.
The Union Minister also was of the opinion that the people should take part in democratic process by casting their vote as the responsible citizens of the country. “Those who are benefitted from democracy have to vote to strengthen it ”, he added and regretted that some people who demand benefits shy away from casting their vote in elections.
Ashok Koul, BJP general secretary (Org) detailed Union Home Minister and gave entire feedback of party’s performance and activities in the UT.
The Core Group also termed today’s rally at Rajouri a remarkable with huge participation of the people.
Meanwhile, BJP co incharge J&K, Ashish Sood said that Home Minister has categorically pin pointed three dynasties which were responsible for pushing the people of the J&K to wall. He said these three dynastic parties Congress, NC and PDP were responsible for 33 year long turmoil in J&K as they befooled and misguided the people for their vested political interests. He said the Home Minister was forthright in saying that these three parties have to be fought politically by not allowing them to come to power again in the UT if we have to build a prosperous J&K.