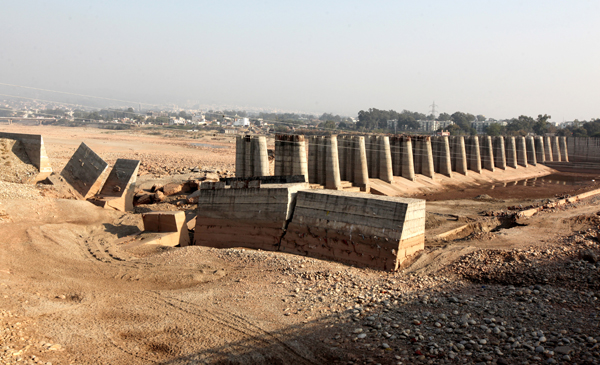 Mohinder Verma
JAMMU, Aug 14: Several financial and other irregularities have been noticed in the execution of River Tawi Gated Barrage Project during the special audit conducted by a team of officers on the directions of the Government. Moreover, it has come to the fore that existing structure is continuously suffering damages in the absence of proper protection work.
The special audit of the project was ordered by Dr Arun Kumar Gupta, Financial Commissioner, Finance Department vide Government Order No.357-FD of 2019 dated May 29, 2019.
The task was assigned to a committee of officers comprising Director General, Centrally Sponsored Schemes in Planning, Development and Monitoring Department, Development Commissioner Works, Chief Engineer Roads and Buildings Department Jammu and Director Codes Finance Department.
The special audit had objectives of assessing actual expenditure on the project, the claim of M/s GVR Infra Projects Limited and spot inspection of various components of the project, which is having much importance for Jammu from tourism promotion point of view, sources said.
“The exact assessment of expenditure and quantification of work will help the State Government in projecting true picture about the River Tawi Gated Barrage Project before the Madras High Court where Arbitration Petition filed by M/s GVR Infra Projects Limited is still pending for disposal”, the Government had stated at the time of issuance of the order vis-à-vis special audit.
During the special audit, several financial and other grave irregularities have been noticed by the team of officers and the same have been conveyed to the Financial Commissioner, Finance Department through a formal report submitted recently, sources said, adding “it has been pointed out in the audit report that work on the project was never executed strictly as per the plan reflected in the contract signed between Irrigation and Flood Control Department and M/s GVR Infra Projects Limited and this was one of the reasons behind slow pace of work”.
“The existing infrastructure of the project is continuously suffering damages mainly during the monsoon season in the absence of final protection work, which was part of the remaining component”, sources privy to the findings of the committee said, adding “had protection work been executed in a well planned manner continuous damage to the project could have been avoided”.
It has also come to the fore during the special audit that mobilization advance of several crores of rupees given to M/s GVR Infra Projects Limited was not recovered by the concerned authorities of the Irrigation and Flood Control Department for obvious reasons. “Still the company has to return a major portion of the mobilization advance to the Government”, sources said.
Moreover, from time to time the company was paid money in violation of clauses mentioned in the contract, they further revealed, adding “payments were made to the company against those works which were yet to be completed and this amounts to grave financial irregularity on the part of the concerned authorities of the Irrigation and Flood Control Department”.
The committee of officers has recommended that tenders for remaining work on the project should be floated as early as possible so as to check continuous damage to the existing structure and completion of the entire project as expeditiously as possible, sources further said.
Though the committee has not made any recommendation vis-à-vis initiating action against the erring officials of the Irrigation and Flood Control Department yet this aspect should not be ignored by the Government, sources said, adding “all those officials who were supposed to recover mobilization advance and make payments strictly as per the contract clause should be taken to task so that in future nobody dares to resort to grave financial indiscipline”.
“It is a matter of serious concern that River Tawi Gated Barrage Project, which on one side will lead to creation of artificial lake for attraction of tourists and on the other side help in providing 120 cusecs of water to huge chunk of agricultural land during peak requirement has met uncertain fate”, sources said and hoped that Government will act immediately to re-start work on the project.
“There is no hurdle in resumption of work on the project by floating fresh tenders as Madras High Court has already vacated the interim injunction regarding termination of contract allotted in the favour of M/s GVR Infra Projects Limited”, sources said.