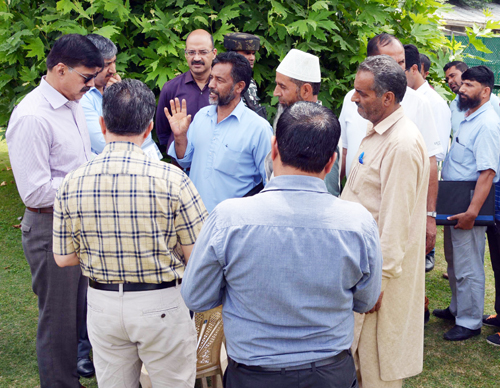 Excelsior Correspondent
SRINAGAR, Aug 1: Several deputations comprising civil society groups, representatives of employees’ unions, public delegations from different districts met the Advisor to Governor, K Vijay Kumar at Governor’s Grievance Cell at Church Lane, here today.
The deputation from High Ground Anantnag gave a representation to the Advisor demanding release of pending rent against use of their land by various Government agencies.
A delegation from Shangus in Anantnag requested for the posting of doctors and other paramedical staff along with necessary diagnostic facilities at newly created Sub-District Hospital.
A delegation of BDS Graduates hailing from various parts of Kashmir division demanded filling up of vacant posts in the Government dental hospitals in the State.
A delegation of Rehbre-e-Janglat also met the Advisor and requested for resolving the issue of difference in their grade pay on the pattern of Rehbre-e-Taleem and Rehbre-e-Zirat.
Another delegation of casual workers of Forest Department demanded release of pending wages to them.
The deputation of All J&K Chowkidar Association met the Advisor and put forth their demands for their redressal.
A delegation of the candidates who have cleared the examination for the post of Fireman demanded re-conducting of the examination as the same was cancelled by the Government.
Various public delegations and individuals hailing from Anantnag, Budgam, Kupwara, Sopore, Srinagar, Ganderbal, Kulgam, Baramulla and Rajouri turned up at the venue and apprised the Advisor of their grievances, issues and demands and sought their early redress.
Earlier, the Advisor reviewed the grievance redressal mechanism with the officers of JK Governor’s Grievance Cell along with the details of grievances received/ redressed till date. He also asked the officers of JKGGC analyze the grievances registered with the JKGGC by the people pertaining to the different departments, percentage of grievances filed by male/female and grievances of youngsters registered with the cell.