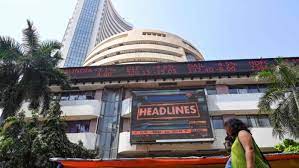 Mumbai, Oct 4: Benchmark indices Sensex and Nifty bounced back on Tuesday to close over 2 per cent higher amid positive trends in global equity markets.
The 30-share BSE Sensex spurted 1,276.66 points or 2.25 per cent to settle at 58,065.47. During the day, it zoomed 1,311.13 points or 2.30 per cent to 58,099.94.
The broader NSE Nifty rallied 386.95 points or 2.29 per cent to end at 17,274.30.
Among the 30-share Sensex pack, IndusInd Bank, Bajaj Finance, Tata Consultancy Services, Bajaj Finserv, HDFC, Tata Steel, Larsen & Toubro, Wipro, HDFC Bank and Axis Bank were the major winners.
Power Grid, Sun Pharma and Dr Reddy’s were the only laggards.
Elsewhere in Asia, markets in Seoul and Tokyo ended higher after a rally in US shares after some weak economic data raised hopes that the Federal Reserve might ease away from aggressive interest rate hikes.
Stock exchanges in Europe were trading in the positive territory in mid-session deals. The US markets ended significantly higher on Monday.
The BSE benchmark had tumbled 638.11 points or 1.11 per cent to settle at 56,788.81 on Monday. The Nifty fell by 207 points or 1.21 per cent to end at 16,887.35.
Meanwhile, the international oil benchmark Brent crude futures climbed 0.78 per cent to 89.55 per barrel.
Foreign institutional investors turned buyers after remaining net sellers in the recent past and bought shares worth Rs 590.58 crore on Monday, according to data available with BSE. (AGENCIES)
&&&