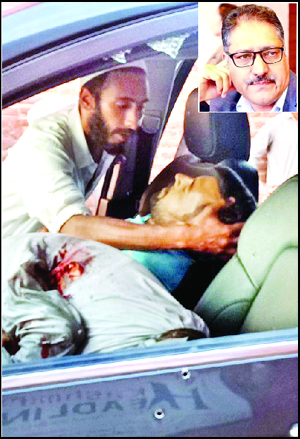 Srinagar, June 14: Senior journalist and Editor in Chief of Rising Kashmir, Shujaat Bukhari, and his two Personal Security Officers (PSOs) were shot dead by unidentified gunmen outside his office at Srinagar Press Enclave this evening.
Eyewitness account revealed said that Bukhari came down from his office to board his vehicle waiting in Press Enclave, Srinagar this evening. His security guards were already waiting for him near the vehicle. Click here to watch video As they boarded the vehicle four armed men fired indiscriminately at the car. They emptied two magazines, some of the bullets hit the wall of the adjacent building. The firing created panic in the busy market.
Witnesses said that two armed men after targeting Bukhari escaped from the Press Enclave towards Abi Guzar while two others took Residency Road route.
Shujaat Bukhari and his PSOs suffered serious bullet injuries.  The driver cum PSO was removed to hospital for treatment who later succumbed to injuries while Bukhari and another PSO were lying in a pool of blood inside the car. Sources said that they had died on the spot and were later taken to Police Control Room. His PSOs have been identified as Abdul Hameed and Mumtaz Ahmad.
Director Gene-ral of Police SP Vaid  said: “Today at about 7:30 pm when Bukhari was coming out of his office and boarding his car, three terrorists, who had come on a motorcycle, opened fire. Two of his PSOs (Personal Security Officers) were also hit… They were shot before they could react,” he said. “They chose the Iftaar time when everybody was rushing home. We will look into who these people are,” he added.
Bukhari, who was in his 50s, left behind two kids and wife. He had served in different local, national and international media houses. He was the Editor-in-Chief of Rising Kashmir, a Srinagar-based daily. He was previously the Kashmir Bureau Chief of The Hindu, a post he held for 15 years.
He did his Masters in Journalism from Ateneo de Manila University, Manila as a fellow of the Asian Centre for Journalism, Singapore. He was a recipient of the World Press Institute (WPI) USA fellowship and Asian Centre for Journalism Singapore fellowship. He was also a fellow at East West Centre at Hawaii, USA.
Bukhari had survived three assassination attempts in the past. He had been under police protection since an attack on him in 2000.
Bukhari had been part of India’s delegation for Track II (talks that happen outside of official government authorities) process with Pakistan. The talks had happened in Dubai in 2017. He was instrumental in organising several conferences for peace in the Kashmir Valley.
Meanwhile, the Jammu and Kashmir Police late night released two pictures of three bike-borne men who are suspected to have killed Bukhari, and sought the public’s help in identifying them.
The three militants were caught on a CCTV camera, the police said.
The two pictures showed the three men riding a motorcycle. The attackers had their faces covered.
The police released the pictures late night and asked the public to help them identify the attackers.
“In connection with today’s terror attack at Srinagar, police requests general public to identify the suspects for the purpose of the police investigation,” a statement read.
The name of the person providing any clue or information regarding the suspects will be kept confidential, it said.
Chief Minister, Mehbooba Mufti has strongly condemned Bukhari’s killing. She described the killing as highly barbaric, deplorable and condemnable.  “His killing today has only established that violence cannot stand the scrutiny of logic and rationality”, she said in her statement adding the whole State today stands in unanimity in condemning this inhuman act of savagery.
Mehbooba said the role and contribution rendered by Bukhari in institutionalization the media here has become part of the journalistic history of the State. “One would always see him raising issues of common cause concerning people. He would often fight for the issues of people through his columns and various discussions but alas this voice of people stands silenced today brutally”, she added in her message.
The Chief Minister visited the hospital and paid her respects to the departed soul. She also conveyed her heartfelt sympathies with the bereaved family particularly his parents, wife and two kids.
Governor NN Vohra has conveyed shock and grief on the gruesome killing. Recalling Bukhari’s standing as a veteran journalist Governor described his murder as a big loss to the media fraternity. Governor has prayed for peace to the departed soul and strength to the bereaved family to bear this irreparable loss. He called Basharat Bukhari, Cabinet Minister and Shujaat’s brother, to convey his heartfelt sympathy.
Bukhari is the fourth journalist to be killed by militants in the nearly three-decade-long violence in Kashmir. In 1991, the editor of ‘Alsafa’, Mohammed Shaban Vakil, was killed by militants of Hizbul Muahideen.
Former BBC correspondent Yussuf Jameel escaped with injuries when a bomb exploded in his office in 1995, but ANI cameramen Mushtaq Ali lost his life in the incident.
Later on January 31, 2003, Parvaz Mohammed Sultan, editor of NAFA, was shot dead by Hizbul Mujahideen at his Press Enclave office.
Hours before he was killed, Bukhari distinguishable by his over six-foot tall frame and husky voice was steadfastly defending his work on microblogging site Twitter when he was accused by some Delhi-based journalists of “biased” coverage.
“…In #Kashmir we have done Journalism with pride and will continue to highlight what happens on ground,” he had said in the tweet.