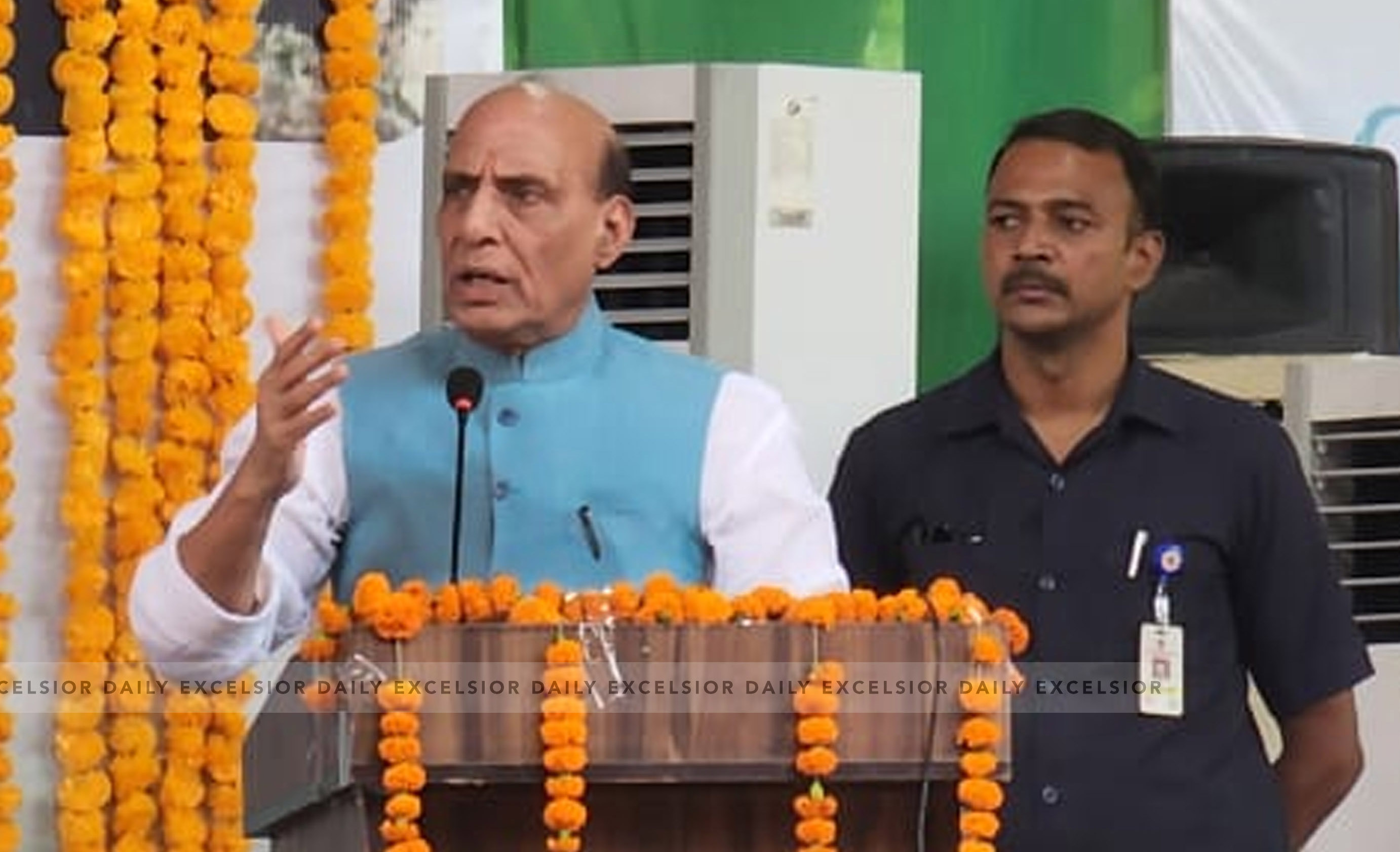 Jammu, July 24: Highlighting the Centre’s effort to build a self-reliant defence ecosystem, Defence Minister Rajnath Singh on Sunday said that self-reliant India is well-equipped to give a befitting reply to anyone who casts an evil eye.
Speaking at an event here to commemorate Kargil Vijay Diwas, Singh said, “The Kargil war underlined the dire need to achieve jointness and self-reliance in the defence sector. It has been India’s endeavour to achieve these qualities to remain prepared for future challenges.”
He emphasised that setting up of Joint Theatre Commands and reforms to achieve self-reliance in defence are the steps taken in that direction.
While addressing a public meeting at Police lines in Jammu, he recalled the contributions of those who laid their lives for the country in the 1999 Kargil War and met family members of martyrs.
Singh stated that it was the spirit of national pride at the core of their values that protected the unity and integrity of India. He asserted that the sole aim of the government is to safeguard the interests of the nation and it has taken a series of steps to develop a self-reliant defence ecosystem that provides indigenous state-of-the-art weapons/equipment to the Armed Forces to fight all kinds of future wars.
“In 1962 China captured our area in Ladakh, with Pandit Nehru as our PM. I will not question his intentions. Intentions can be good but the same does not apply to policies. However, today’s India is one of the most powerful countries in the world,” he said.
Sharing his views on the numerous challenges faced by India post-independence, Singh said, the entire area of Jammu and Kashmir and Ladakh became the ‘Main War Theatre’ during 1948, 1962, 1965, 1971 and 1999 wars, when enemies tried to cast an evil eye, but whose plans were thwarted by the gallant Indian soldiers.
He also paid respects to the Indian soldiers who displayed unmatched bravery during the Galwan valley incident and ensured that the Indian tricolour continues to fly high.
“After tasting defeats in direct wars of 1965 and 1971, Pakistan adopted the path of Proxy War. For over two decades, it has tried to ‘Bleed India with Thousand Cuts’. But, time and again, our brave soldiers have shown that no one can disturb the unity, integrity and sovereignty of India,” he added, assuring the nation that the Armed Forces are ready to face all future challenges.
Singh remembered then Prime Minister the late Atal Bihari Vajpayee for his leadership and words of encouragement to the Armed Forces personnel during the Kargil war despite numerous challenges and international pressure. He termed the victory as a prime example of jointness among the three Services and their coordination with the government which safeguarded the sovereignty and integrity of the nation during testing times.
He stated that Jammu and Kashmir will always be an integral part of India and the government is ensuring that the Union Territory, like the rest of the country, touches newer heights of progress. Terming Article 370 as an artificial legal barrier, he asserted that its abrogation brought a new dawn of hope to the dreams and aspirations of the people of J-K, especially the youth. The decision opened new avenues for the welfare of the people and the Union Territory is now progressing at a much faster rate, he said.
On PoK and Gilgit-Baltistan, he stated that these areas are illegally occupied by Pakistan and a unanimous resolution to free them has been passed in the Parliament of India. A number of serving Armed Forces personnel as well as veterans, including Param Vir Chakra awardee Captain Bana Singh, were among those present on the occasion.
Kargil Vijay Diwas is observed every year on July 26 to commemorate India’s victory over Pakistan in the 1999 war. (Agencies)