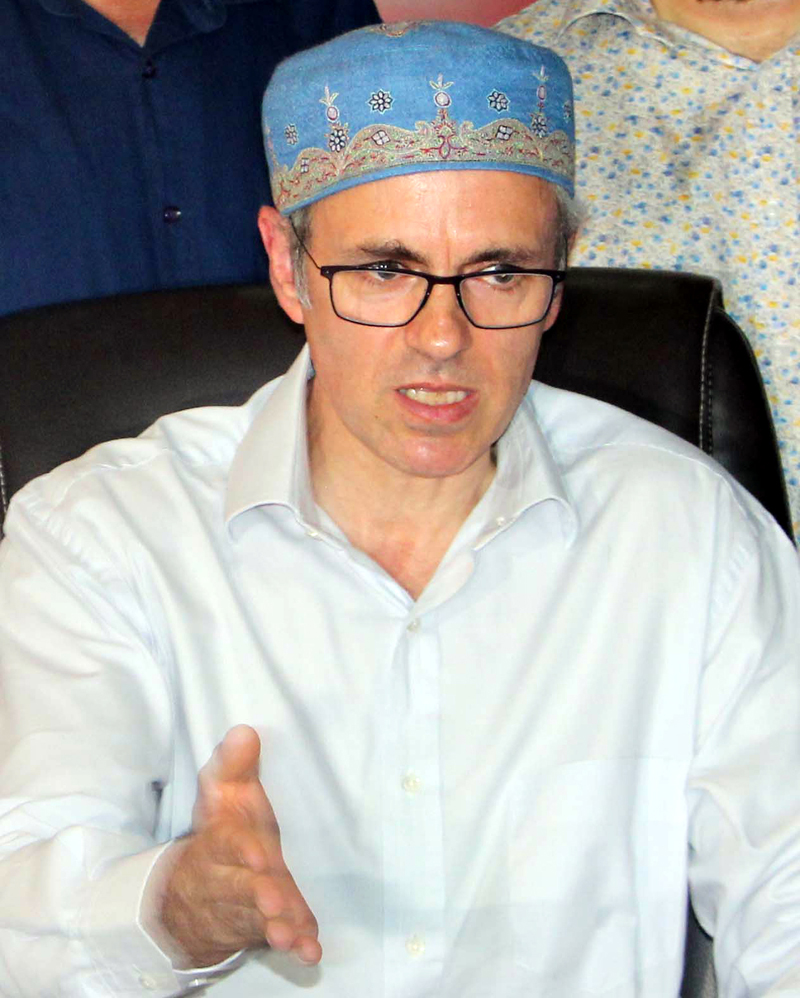 ‘Increase in flights, tourists no signs of normalcy’

JAMMU, May 20: Asserting that increasing tourism activity and the number of flights to Kashmir cannot be considered as sign of normalcy, former J&K Chief Minister and National Conference vice president, Omar Abdullah today said that the security situation was turning worse day by day in the J&K UT.
In an inter-action with media after inaugurating new media centre at party office here today, Omar said the state of fear was such that Kashmiri Pandit employees were ready to leave their jobs and run away from Kashmir.

The Jammu and Kashmir has been witnessing protests by Kashmiri Pandits since the killing of community member and Government employee, Rahul Bhat by militants inside his office at Chadoora in Budgam on May 12.
“Flights and tourism are not signs of normalcy. Normalcy is that there should be no fear and terror. Kashmiri Pandits should not run away. They are ready to leave their jobs. Is this normalcy?” Omar asked.
Referring to their plight, Omar said hapless Kashmiri Pandit employees met leaders of the People’s Alliance for Gupkar Declaration (PAGD) seeking justice. “PAGD leaders went to Lieutenant Governor seeking help that Pandits should not leave the Valley. It is not normalcy,” Omar asserted.
While replying to a question on the Government’s claim that normalcy has returned to Kashmir as there is a heavy rush of tourists and flights amid decrease in stone pelting, Omar said that his Government had also brought stone pelting under control several times.
“If an employee becomes target on his own seat in a busy office, or cop gets killed at home, if this is new face of normalcy, I cannot say anything,” he added.
“We feel sorry that innocent people are being killed one after another. Minorities are being killed. Police personnel are being targeted. Civilians are getting killed in cross-firing and in other incidents,” he said.
Taking a dig at the BJP Government over its claim that the situation would become normal after Article 370 was scrapped, he said, “Two-and-half years have passed, where is improvement in the situation? Targeted killings had stopped in the past. I can’t remember when the circle of targeted killings took place last time. Today, people are not feeling secure in Kashmir.”
He said terrorism was returning to the places which had earlier been cleared of terrorists, particularly Srinagar and its adjoining areas and those in north Kashmir.
“There has been a lot of difference between what is said and done by the Government. The situation is getting worse day in and day out,” he regretted.
Asked whether the targeted killings started after the release of ‘The Kashmir Files’ movie, he said such incidents took place even before. He referred to the killing of Chemist Makhan Lal Bindroo and Akash, the son of the owner of the popular food outlet near Burn Hall School, ‘Krishna Dhaba’ in Srinagar, last year.
Abdullah said it is for the people to decide whether the movie has contributed in improving the situation or worsening it.
Replying to another question on the ban on loudspeakers in Jammu, he said the authorities should adopt a middle path so that sentiments of the community are not hurt.
While referring to the survey at Kashi Vishwanath temple and adjoining religious site, Omar said after Ayodhya verdict, the top BJP leaders had mentioned that they will stay away from religious issues but now the new issue of `Gyanvapi’ at Banaras has been in the headlines for the past few days. He said such issues would raise new controversies and take the country towards division and destruction. It will only harm the country and not good to its people, Omar maintained.