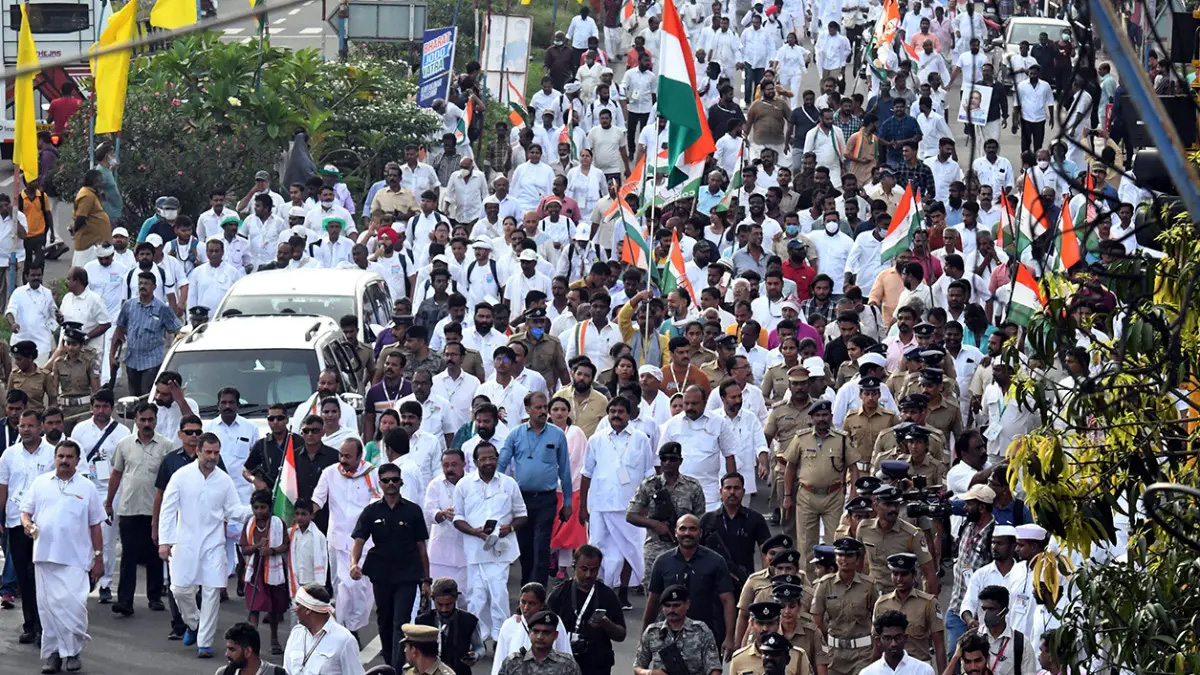 THIRUVANANTHAPURAM, Sept 12:
The Congress party’s Bharat Jodo Yatra entered the second day in Kerala on Monday, amid an encouraging turnout of people who have been lining up the streets of the state in thousands to extend support to Rahul Gandhi who has embarked on the 3,500 km Kanyakumari-Kashmir foot march.
The 150-day yatra was launched from Kanyakumari in neighbouring Tamil Nadu on September 7.
Gandhi commenced his walk from Vellayani junction here on Monday morning.
“Every morning fills me with hope and conviction that a better tomorrow awaits India and our young generation. Everyone for India, Every step for India,” he said in a Facebook post.
Besides those turning up to join the foot march, scores of people lined up on both sides of the road to witness the ‘padayatra’ led by Gandhi, who is also the MP from Wayanad in Kerala.
“Day 5 of #BharatJodoYatra began in right earnest as usual around 7am from Vellayani junction at the outskirts of Thiruvananthapuram. The morning session of the padayatra will cover around 11 kms moving into the heart of the capital of Kerala,” AICC general secretary in-charge of Communications Jairam Ramesh tweeted.
He also tweeted that “immersed” in the yatra, he missed noting the 50th anniversary of the Wild Life (Protection) Act on September 9. “Immersed in #Bharat JodoYatra, I missed noting 50th anniv of the landmark Wild Life(Protection) Act on Sep 9. It was the personal commitment of Indira Gandhi that made it a reality. Environmentalist Sridhar who met @RahulGandhi acknowledges India’s past stewardship in conservation,” Ramesh said.
During Sunday’s yatra, Gandhi walked with environmentalist Sridhar Radhakrishnan to discuss a host of issues including climate change, a statement issued by the party said.
Besides, children, youngsters and the elderly who briefly walked with the Wayanad MP during the yatra, senior Congress leaders like party MPs Shashi Tharoor, K C Venugopal, KPCC president K Sudhakaran and Leader of Opposition in the state assembly V D Satheesan also accompanied Gandhi.
At close to 10.30 am, the yatra halted at St Mary’s school at Pattom here from where it is scheduled to resume at 5 pm.
In the interim break, Gandhi is scheduled to meet eminent personalities for lunch and distribute prizes to winners of the Jawahar Bal Manch painting competition, according to an itinerary of the yatra released by the Congress.
The over three-hour long brisk walk from Vellayani junction to Pattom, a distance of around 12 kilometres, saw more and more people joining the yatra.
The Bharat Jodo Yatra, which entered Kerala on Saturday evening, will traverse through the state covering 450 kilometres, touching seven districts over a period of 19 days before entering Karnataka on October 1.
On Sunday, when the day’s yatra ended at Nemom here, Gandhi had said Kerala respects everyone and does not allow itself to be divided or hatred to spread, and that the Bharat Jodo Yatra, in a sense, was an extension of these ideas.
“Standing together, working together in harmony is natural and normal for the people of Kerala and you have shown this to the rest of the country,” he had said.
“Kerala respects everyone in Kerala. It does not allow itself to be divided nor does it allow hatred to spread in the state. So in a sense, Bharat Jodo Yatra is just an extension of the ideas that prevail in Kerala,” Gandhi further said.
The first day of Congress’ Bharat Jodo Yatra in Kerala, where the party has a significant cadre base and followers, had also seen a huge turnout which increased during the day as the journey progressed from Parassala to Nemom in the southernmost district of the state. (PTI)
The yatra will cover 12 states and two Union territories, and a distance of 3,570 km from Kanyakumari in Tamil Nadu to Jammu and Kashmir over a period of 150 days.
There will be mega rallies in 22 major cities. (PTI)