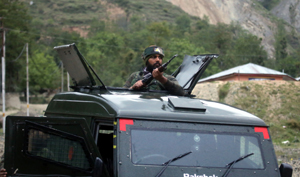 SRINAGAR, May 3: Security forces today launched a cordon-and-search operation in parts of Baramulla district of North Kashmir.
A joint team of Army’s 46 RR, SOG and CRPF cordoned off Drangbal village, which is few kilometers away from the Old Town Baramulla.
Soon after the joint team of security forces laid the siege of the village, some gunshots were heard from the area.
A police officer said that the security forces had information about movement of two militants in the area.