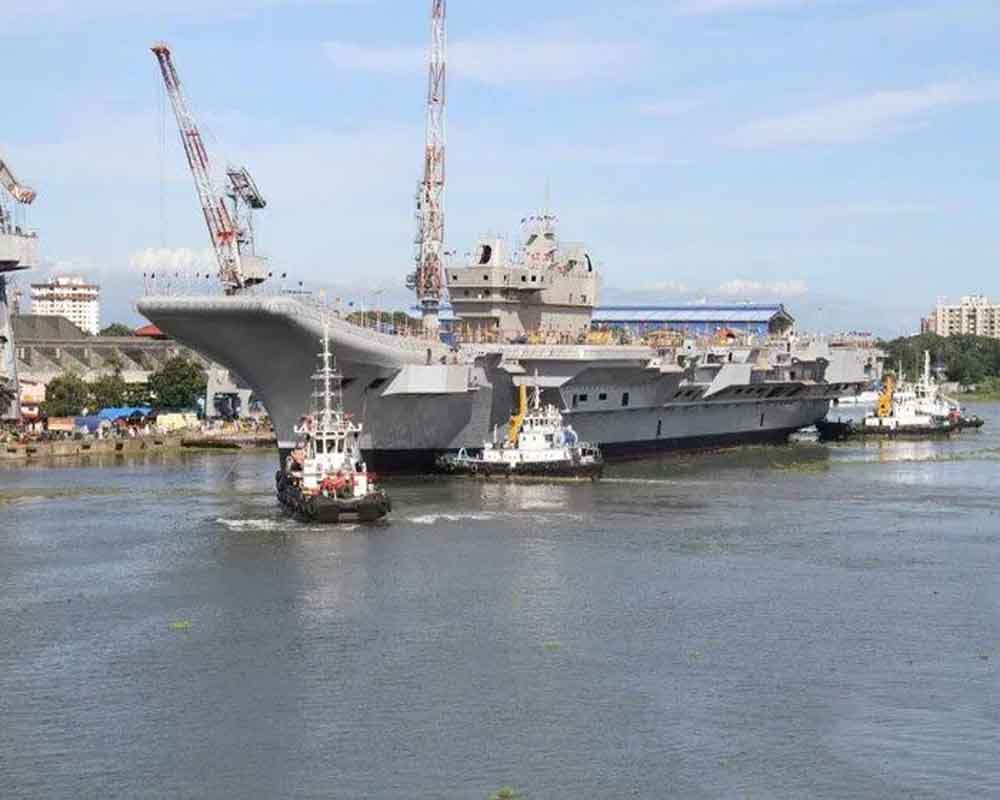 By commissioning of Vikrant , Indian Navy’s and the country’s pride-the indigenously made Aircraft Carrier –the largest ship ever built in India’s maritime history — India has thus entered the limited and the elite club of six powers of the world with their own aircraft carriers. The sunrise of the new future of India is evident and every Indian in whichever capacity one was working was not only a witness to it but aspiring that it shone brightly all to our reaching zeniths of progress, self reliance and sufficiency, vocal for local ideology etc to push up constantly the micro and macro economic variables promising aggressively pursued manufacturing process and consequently the employment. Hence, this splendid asset of the country to defend its waters and territories is the vindication of the importance of “Make in India” and taking large strides towards attaining self sufficiency especially in the most sensitive and strategic defence matters with dependence on ”others” to the barest minimum possible. In fact, India has demonstrated its indigenous capabilities to design and build aircraft carriers of the most advanced technology orientation.
This huge floating majestically device is embodiment of Indian Navy’s offensive and defensive capabilities and recoiling to our ”past glorious expertise and prowess” in maritime issues of building huge ships. The Prime Minister, while quoting from sacred scriptures defined peace and power or strength as indispensible and inseparable from each other. Hence, in the highest traditions of our Indian culture and traditions, spreading and strengthening peace all over has been our way of life and the philosophy about sustenance of peace but possessing enough strength to protect and strengthen peace was equally paramount. Can therefore, it be not safely deduced that the IAC Vikrant represents blend of peace and power, it rightly does so.
Live and let live is all concerning peace but any attempt from anywhere on the obverse, must be met with all the strength. It is rightly said that 21st century belongs to India as just by visualising the quantum of hard work, dedication, talent and a total commitment of all those engaged in the making and shaping of Vikrant are ambassadors of carrying tangibly this message all over the globe that not only did 21st century belong to India but an aspiring “Vishva Guru” a special placement in the niche of science, technology and tremendous Human Resources was not a distant dream.
Those who watched live the event from Kochi in Kerala where the Prime Minister dedicated the Indian engineering marvel to the nation must have felt elevated emotionally as well as patriotically in that the ”floating airfield” can boast of state -of- the art weapons, navigation and automation features. The country of the size of India having a very large coastline, to be precise, nearly 8000 Kms, with Bay of Bengal in the Eastern sector, the Indian Ocean on the South and the Arabian Sea in the West and to quote the words of the Prime Minister at the historic event “confronted with enormous challenges” from the seas must be strong enough with the latest technology fitted war ships to defend its waters. Why should, therefore, India not assert itself as a ”force to reckon with ”in the Indo-Pacific region for which the Vikrant is “large, grand, distinct and special” again in the words of the Prime Minister.
There are several barometers to assess whether a nation is developed and making indigenously a splendid, strong, superb and spectacular aircraft carrier like Vikrant with enough provision of carrying a component of as many as 30 aircraft which include helicopters, fighters and other types of aircraft is one such yard stick to measuring the status of development. Other aircraft carriers of the country like Vikramaditya too can carry as many as 30 aircraft. One more important thing about the Vikrant is its expected all round combat readiness by 2023. This massive national asset which is 262 meter long with a full displacement to 43000 tonnes was designed by the Navy’s in-house Warship Design Bureau (WDB) and constructed by Cochin Shipyard Limited and its making too took 13 years.The most important aspect at the event is that of bestowing on the Navy its own Indian ensign (flag) thus ridding it of a symbolic attachment with the colonisers of this country, even after seven decades.