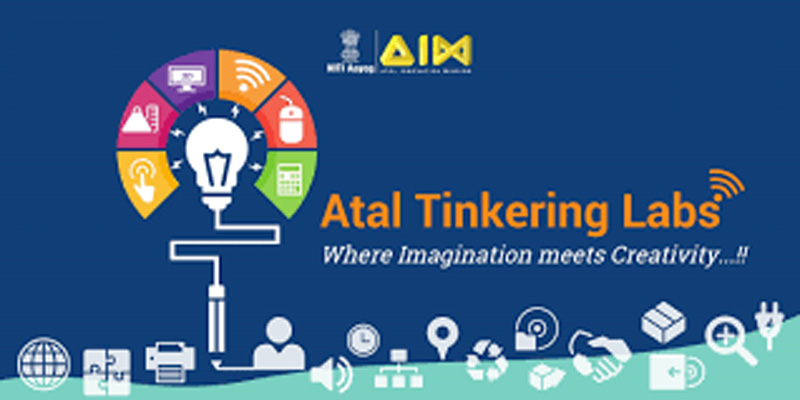 *Vast population of students yet to derive benefit of major scheme

JAMMU, Feb 12: The School Education Department of the Union Territory of Jammu and Kashmir is unlikely to meet the target of establishment of 100 more Atal Tinkering Labs before the completion of current financial year as such vast population of students will remain deprived of the benefit of the scheme aimed at fostering curiosity, creativity and imagination in young minds.
With a vision to ‘Cultivate One Million children in India as Neoteric Innovators’, Atal Innovation Mission is establishing Atal Tinkering Laboratories in schools across India and the objective of this scheme is to foster curiosity, creativity and imagination in young minds and inculcate skills such as design mindset, computational thinking, adaptive learning and physical computing etc.
Under the scheme, each school is sanctioned Grant In Aid of Rs 20 lakh over a period of five years as establishment and operational cost. Out of the total, first tranche is released as establishment and operational cost strictly subject to fulfilling the compliance process and subsequent tranches of Rs 2 lakh each are given in next four years as operations and maintenance cost.
In Jammu and Kashmir, only 88 Atal Tinkering Labs have been established during the past six years. Two were established in 2016 and none in 2017. Seven were set up in 2018, 30 in 2019 and 31 in 2020. However, during 2021 only 18 Atal Tinkering Labs were set-up by the School Education Department. Of the total 88 labs, 55 have been set up in Government schools and 33 in private schools.
On December 9, 2021, Chief Secretary Dr Arun Kumar Mehta took stock of the arrangements for opening Atal Tinkering Laboratories in various educational institutions of Jammu and Kashmir. The Chief Secretary was informed that NITI Aayog will be establishing 1000 Atal Tinkering Laboratories in the Union Territory of which 187 will be set up by the end of this financial year. It was further revealed in the meeting that out of 187, 31 will be set up in the Government schools while as 50 will come up in various other educational institutions including KVs, JNVs and private schools.
“Twenty days after the meeting, the School Education Department established one Atal Tinkering Laboratory but given the present pace of exercise it is unlikely to meet the target fixed for the current financial year”, official sources told EXCELSIOR, adding “even NITI Aayog is not sure about the J&K Government fulfilling the commitment made in a meeting attended by Mission Director of Atal Innovation Mission”.
“Had serious attention been paid towards obtaining assistance from the Atal Innovation Mission since 2016 sufficient number of Atal Tinkering Laboratories could have been established till date”, sources said, adding “as NITI Aayog wants to establish 1000 Laboratories in J&K Union Territory, the School Education Department should expedite the procedural formalities so that vast population of students start deriving benefit of the important scheme of the Government of India”.
EXCELSIOR made repeated calls to several officers of the School Education Department to ascertain the progress towards the establishment of Atal Tinkering Laboratories but either there was no response or ignorance was expressed. However, sources in NITI Aayog admitted that meeting target of establishment of 100 Atal Tinkering Laboratories before March 31, 2022 is a daunting task for the School Education Department of J&K Government.
It is pertinent to mention here that Atal Tinkering Laboratory is a workspace where young minds can give shape to their ideas through hands on do-it-yourself mode and learn innovation skills. Moreover, young children get chance to work with tools and equipment to understand the concepts of STEM (Science, Technology, Engineering and Math). Further, the Laboratories contain educational and learning ‘do it yourself’ kits and equipment on – science, electronics, robotics, open-source microcontroller boards, sensors and 3D printers and computers. In order to foster inventiveness among students, Atal Tinkering Laboratories are supposed to conduct different activities ranging from regional and national level competitions, exhibitions, workshops on problem solving, designing and fabrication of products, lecture series etc. at periodic intervals.