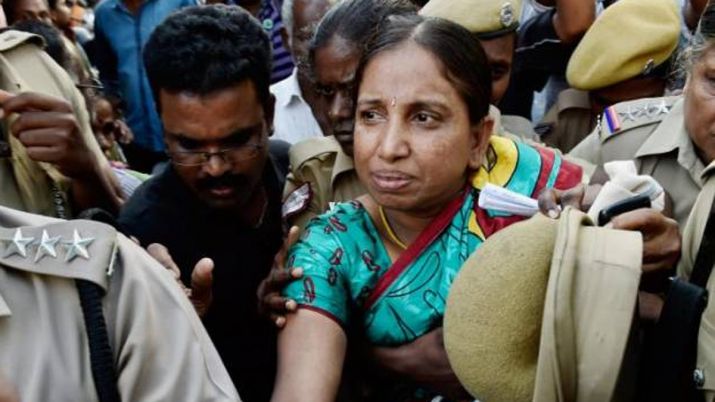 NEW DELHI, Sept 26: The Supreme Court on Monday sought responses from the Centre and the Tamil Nadu government on a plea filed by Nalini Sriharan, serving life sentence in the Rajiv Gandhi assassination case, seeking premature release.
A bench of Justices B R Gavai and B V Nagarathna issued notices to the Centre and the Tamil Nadu government and sought their replies on the plea.
The top court also issued notices on the plea filed by R P Ravichandran, who is also a convict in the case.
Nalini has challenged the June 17 order of the Madras High Court, which rejected her plea for early release, and cited the apex court judgement ordering the release of co-convict A G Perarivalan.
The high court had on June 17 rejected the petitions of Sriharan and Ravichandran, both convicted in former prime minister Rajiv Gandhi assassination case, to order their release without even the consent of the state’s governor.
The high courts do not have the power under Article 226 of the Constitution to do so, unlike the Supreme Court which enjoyed the special power under Article 142, the high court had said while rejecting their pleas.
Invoking its extraordinary power under Article 142 of the Constitution, the top court had on May 18 ordered the release of Perarivalan, who had served over 30 years in jail, and said the Tamil Nadu governor ought not to have sent the “binding” advice made by the state cabinet for his release to the president.
The apex court had said the advice of the state cabinet is binding on the governor in matters related to commutation/remission of sentences under Article 161 of the Constitution.
Under article 142, the top court may issue any verdict or order necessary to provide “complete justice”.
Gandhi was assassinated on the night of May 21, 1991 at Sriperumbudur in Tamil Nadu by a woman suicide bomber, identified as Dhanu, at a poll rally.
In its May 1999 order, the top court had upheld the death sentence of four convicts Perarivalan, Murugan, Santhan and Nalini.
However, in 2014, it commuted the death sentence of Perarivalan to life imprisonment along with those of Santhan and Murugan on grounds of delay in deciding their mercy petitions.
Nalini’s death sentence was commuted to life imprisonment in 2001 on the consideration that she has a daughter. (PTI)