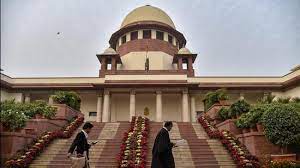 NEW DELHI, Sept 27: In a first, the Supreme Court on Tuesday began live-streaming its constitution bench proceedings.
On September 27, 2018, the then Chief Justice of India Dipak Misra had delivered the landmark judgement on the live telecast or webcast of important proceedings in matters of constitutional importance, saying “sunlight is the best disinfectant”.
The proceedings can be accessed at webcast.Gov.In/scindia/, said an official.
On Monday, a bench headed by Chief Justice Uday Umesh Lalit said the top court will soon have its own “platform” to live-stream its proceedings instead of having to use the YouTube.
In a unanimous decision taken at a recent full court meeting headed by the CJI, the apex court decided to live-stream proceedings of all constitution bench hearings from September 27, four years after the path-breaking announcement by Justice Misra.
The apex court may live-stream proceedings through YouTube and later host them on its server, sources had said. People will be able to access the proceedings on their cell phones, laptops, and computers without any hassle.
On August 26, for the first time since its inception, the Supreme Court live-streamed proceedings of a bench headed by then Chief Justice (since retired) N V Ramana through a webcast portal. It was a ceremonial proceeding as Justice Ramana was to demit office that day. (AGENCIES)