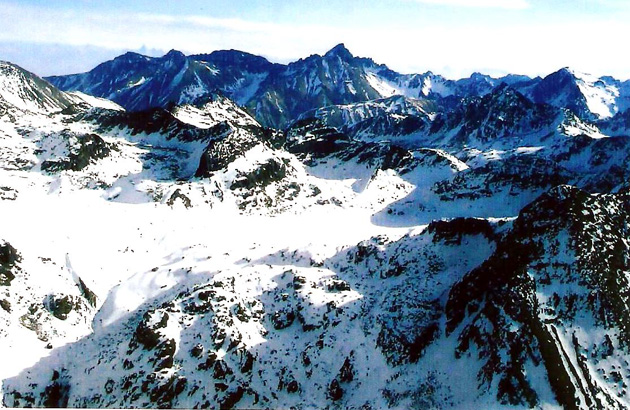 K.D Maini
The most attractive scenic spot and nature blessed Sawjian-Gagrian valley is located exactly on the opposite side of renowned hill resort-Gulmarg of Kashmir.  The Alpather range of mountains and Chour Panchal Pass bifurcates Sawjian from Gulmarg which falls in Poonch district.   The climate, terrain, vegetation and geographic conditions of Sawjian resembles that of Gulmarg.  The valley is surrounded by snow clad high peaks of Pir Panchal, thick Deodar forest  with rich natural vegetation.  Crystal   clear Gagrian stream passing through the heart of the valley. The double storey Kashmiri style houses on the slopes of the mountains here and there,  flowers, and green turf all over the vacant lands adds to the beauty of the valley.
Sawjian which is 36 kilometers in the north of Poonch town is also nearer to the line of actual control which moves from Sawjian towards Anganpathri and touches the heights of Gulmarg range.  The valley comprises of Gagrian, Narrian, Rangwar, Sari Mangyana, Brari, Gali Madan, Kopra etc.. The valley opens towards Kashmir valley through Chour Pass, Dewar Pass and Jamia Pass. As per Rajtarangini number of battles were fought in this valley between the forces of Raja Jai Singh of Kashmir and his rebel Minister Sujji in between 1120 to 1145 AD.
With the start of spring  Gujjars and Bakerwals migrates to Dhoks and Mergs of Sawjian area. These high pasture lands which are located in between 6000 to 11000 feet above the sea level are most beautiful and natural spots.  The forest and snow zone area of Sawjian is abode of wild life and destination of Shepherds and nomadic tribes. Mergs and Meadows.  The life style, natural diet, unique type of hobbies and folklore of nomadic tribes convert the jungle areas into the centre of hustle and bustle.
The movement of travellers towards  Kashmir also starts from Sawjian via Rangwar, Nerian, Sari Mangyana and Chour Pass.  This is one day journey from Sawjian to Gulmarg or Tungmarg.  No infrastructure facilities are available to visitors and travellers on these routes.  There is a need of 15 kilometer sustainable bridal path from Sawjian to Chour Pass a part  from construction of Sarais or resting stations at Rangwar and Sari Mangyana for the convenience of visitors. By this way we can convert this shortest possible route from Sawjian to Gulmarg into trackers and hikers route.  This can be done only when Gali Madan, helmet of Sawjian could be developed as the base camp of adventurous tourism.
Presently, Rural Development Department has adopted Gali Madan Sawjian as a Model Village. A number of works have been completed like community centre, picnic spot, lane drains etc.  The Tourism department have also proposed to the Government for the transfer of 15 kanal forest land at Gali Madan in favour of tourism department so that a guest house could be constructed at Gali Madan (a helmet of Sawjian) which is the most ideal place for conversion into tourist resort.
The expedition from Gulmarg to Sawjian and vice versa can easily attract local and foreign tourists, provided proper publicity of the scenic spots enroute to a Gulamarg is given and required accomodation facilities are created at Rangwar and Sari Mangyana apart from Sawjian. The peaks of  Pir Panchal ate quite ideal for expedition purposes. Therefore there is an urgent need of  a trackers sarai at Gali Madan with hiking kits, utensils, portable items and guides so that these forgotten scenic paradise located in the periphery of Gulmarg could also came into the limelight and brought on the map of scenic as well as adventurous tourism.
The reference to Sawjian, Gagrian and Rangwar is available in Rajtarangini and other historic books.  In 1130 AD when Poonch was governed by Raja Lothan with capital at Loharkote Loran, the king of Kashmir Jai Singh decided to capture Loran. He deputed the forces  under the command of Lakshkmak. The forces of Kashmir entered  Poonch area via chour Panchal route because the Tosh-e-Madan route was properly defended by Poonch forces.  Lakshkmak crossed Sawjian and converted Saramber (present Chamber Kanari) into his base camp. On the other hand, Sujji the Minister of Raja Lothan chased the forces of Kashkmak in Sawjian valley during the night hours and compelled the forces to retreat.  The Minister Lakshkmak was arrested by Sujji from Sawjian.
Sawjian again came in the limelight in 1814 AD when Maharaja Ranjit Singh tried to conquer Kashmir during his first invasion. After crossing Rattan Pir Pass the forces of Maharaja were divided into three parts, the third part which was led by Maharaja Ranjit Singh had moved from Bowali Poonch towards Sawjian so that invasion could take place via Chour Panchal-Jamia Pass. However, the forces of Maharaja faced tough resistance from  Azam Khan the Afghan Governor of Kashmir near Chour Panchal Pass area.  Ultimately after the battle of few days rainy season started and it became difficult for Punjabi forces to sustain on 12000 feet peak. Therefore the forces fell back at Sawjian and then gradually moved towards Poonch.  In 1819 AD Maharaja again invaded Kashmir and conquered it.  During Dogra period Sawjian was known for Deodar wood, Patus (blankets), wild mushrooms, wild honey and fine quality of walnuts. When  Raja Moti Singh (1852 to 1897 AD) had passed orders for rebuilding of Poonch town, all timber used in the building and palaces constructed in Poonch were brought from Sawjian.  This wood was also used for the renovation of Poonch fort and construction of Mandi Hall, Bagh Deodi, Kotwali, premises of Bagi Khana.