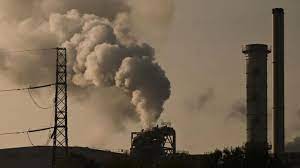 BERLIN, Oct 27: The United Nations is summoning an unusual “witness” to testify to the dangers of burning fossil fuels that stoke global warming: a dinosaur.
In a video released on social media ahead of this year’s U.N. Climate change summit, a computer-generated dinosaur bursts into the U.N.’s famous General Assembly hall in New York to tell world diplomats that “going extinct is a bad thing.”
The light-hearted clip, voiced in the English version by actor Jack Black, carries a serious message that the U.N. Development Programme hopes to drive home.
“You’re headed for a climate disaster,” the dinosaur proclaims. “And yet every year, governments spend hundreds of billions of public funds on fossil fuel subsidies. Imagine if we had spent hundreds of billions per year subsidizing giant meteors.”
In an accompanying report released Wednesday, the U.N. Agency says its research shows that the world spends more than four times as much each year, about $423 billion, to subsidize fossil fuels for consumers than it does to help poor countries tackle global warming.
The figure doesn’t include the indirect costs of burning oil, coal and gas, such as the harm fossil fuel emissions do to the environment and human health.
U.N. Secretary-General Antonio Guterres has repeatedly called for an end to subsidies on fossil fuels, something many governments are wary of because of fears higher prices could spark social unrest.
The head of the U.N. Development Programme, Achim Steiner, acknowledged that reforming the system of fossil fuel subsidies would not be easy and might look different in each country.
“But we also know that we must move away from these energy sources that are contributing to our planet’s decline,” he said. “Ending financial support for them in a way that is fair and equitable is a critical element of that transition.” (AGENCIES)