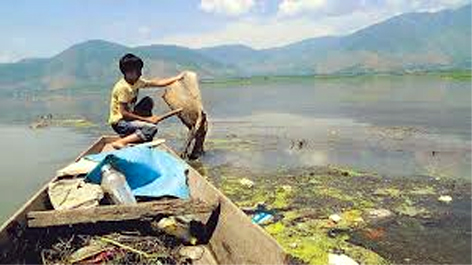 After all, employees of all cadres working in Municipal Council Sopore in Baramulla district and Municipal Committee Bandipora in Kashmir valley,must be knowing a lot about Wular lake being one of the largest fresh water lakes in Asia and its present status, that of having shrunk in its size considerably due to utter negligence and apathy by all concerned towards it and violating to the extent of assaulting it having become just routine, needed immediately to be stopped now . Who asks the concerned employees to dump municipal solid waste nearbyand direct into the Wular lake is baffling. Not that, whatever manner and form adopted to ravage it and rob it of its glory of whatever magnitude left , has any one from the public too ever raised voice against dumping of solid waste and other material adjacent to it and even direct into it, looks quite unfortunate . We have, however, duly been highlighting the casual approach in the administration about the wanton abuse and ill treatment of this lake but it is the residents around this magnificent lake who should raise their voices peacefully but effectively to save this priceless natural boon which once gone would never be retrieved. That would make a lot of difference, indeed.
Having said that, we are pained to know that municipal solid waste was continuously being dumped into this lake mainly by the two ULBs of Sopore and Bandipora and now Jammu and Kashmir Pollution Control Board has been constrained to issue show cause notice on the concerned ULBs. If satisfactory reply within the time limit was not sent by these defaulting ULBs, they could face penalties including prosecution proceedings. The anguish caused to all those who love such bounties of nature on account of attempts to virtually choke this lake to slow death, should be felt by all concerned authorities to devise a mechanism by which such dumping could be stopped altogether. Merely stopping the delinquent ULBs from dumping the material at Ningli Wular demarcated land was not sufficient unless reasons into their doing so were ascertained and solutions found out. Have these ULBs not been equipped with such a mechanism which was aimed at collecting, transporting and finally scientifically disposing of such generated municipal waste at an identified place ?
Water Conservation and Management Authority otherwise must be aware of this illegal act of these ULBs which needed to have been stopped right in initial stages rather than allowing things to reach such a pass. The Executive Officers of these ULBs supposed to be responsible officers must be knowing all about violation of relevant rules under Environment Protection , Municipal Solid Waste, National Green Tribunal orders and other rules by dumping of the material in and around the lake but perhaps being unable to stop such a practice needs to be analysed and gone through effectively .We have, on umpteen times, raised our voice on the condition and present status in respect of the area shrunk tremendously of this lake and pointed to such dumping of waste material earlier also but that the unwarranted and uncalled for practice continues means that all the concerned authorities have not evolved a common mutually agreed methodology of how dumping of waste material was stopped in the immediate vicinity of this lake and where a safe dumping ground could be found only for the scientific and harmless final disposing of the same.
At least, directives of the National Green Tribunal in respect of its order of December 2019 deserved to be complied with wherein it says that “All the concerned Departments shall ensure that there was no scope of ingress of solid waste in and around the water bodies.” Housing and Urban Development Department is in the centre stage of the issue followed by other departments and unless a coordinated and concerted move was initiated , unless proper follow up and monitoring was done on regular basis , unless proper accountability was established , we are afraid, nothing was going to be achieved. This, we say on the basis of our regular reporting and monitoring only to find that things were in utter inertial mode. A paradigm shift in looking at the issue was needed to bring about perceptible improvement.