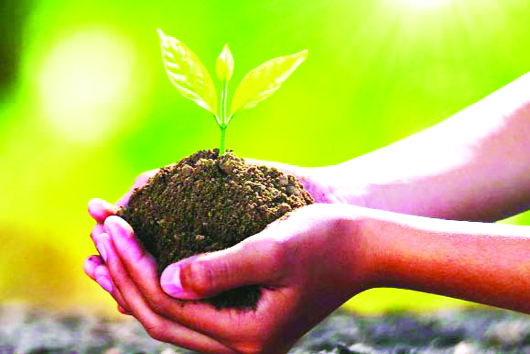 Supriya Sharma
“Earth provides enough to satisfy every man’s needs, but not every man’s greed.”?
Mahatma Gandhi
Save Soil is a global movement launched by Indian yoga guru Jaggi Vasudev better known as Sadhguru, to address the soil crisis by bringing together people from around the world to standup for soil and soil health. This movement highlighted to create new national and international policies towards increasing the organic content in cultivable soil.
In the year 1972, taking action on the increasing incidence of soil pollution, the UN General Assembly launched 5 June as World Environment Day (WED). WED has developed as a platform to raise awareness on the problems facing by our blue planet such as air pollution, soil pollution, water pollution, plastic pollution, illegal wildlife trade, sustainable consumption, illegal wildlife trade, sea level increase and food security. The World Environment Day 2022 global campaign ‘Only One Earth’ calls for transformation of policies to make the earth cleaner, greener and sustainable. The conscious adaptation of new policies, commitments and individual choices will create harmony between the lifestyle of human beings with Mother Nature.
The readjusting, reconstructing, rejuvenating and remaking of our planet by saving all its resources directly save human lives.
The year 2022 is a great historic milestone for the United Nations Environment Programme (UNEP) and the global environmental community. With the support of UNEP a high level international meeting- Stockholm +50: a healthy planet for the prosperity of all- our responsibility, our opportunity- in Stockholm on 2 & 3 June 2022 took place.
According to their estimation 52% of agricultural soils are already degraded. Erosion and degradation of soil impact every aspect of life which may lead to
Food crisis- Poor soil leads to poor nutrient value. Soil quality has also impact on the production of crops. There is an increasing demand of food in India as the population has increased manifolds since Independence of our country. But the poor quality of soil will impact this and increasing use of fertilizers and chemicals may increase the production but its impact on soil quality will be deleterious in long run.
Water Scarcity- Depleted soil cannot able to hold and absorb water, which may lead to drought, scarcity of water and floods. We are seeing this phenomenon in our country. While some regions are facing the drought like situation, the other areas in the country are flooded. Poor quality soil which is not able to absorb and retain the water is one of the major factors for this phenomenon.
Loss of Biodiversity- Scientists estimated that around 27000 sp. of life forms are becoming extinct every year due to the loss of habitat which may be attributed to the degrading soil quality.
Climate change- The carbon storage of soil is 3 times by living plants and about 2 times that of atmosphere which shows that soil is crucial for carbon sequestration. Erosion of soil will lead to more carbon release and hence more heat in the atmosphere leading to global warming which is the hot topic in any environment conference around the globe. It is estimated that due to loss of soil, about 850 billion tons of carbon dioxide is directly released into the atmosphere.
Loss of livelihood- Farmers directly depend upon soil for agriculture and their livelihood. With the erosion and loss of quality of soil, the agricultural land loses its fertility, thus leading to loss of crops or poor quality of crops. Many farmers have committed suicide due to loss of crops which is directly related to the poor quality of the soil and lack of fertility.
Conflict & Migration- Loss of soil which leads to food and water scarcity as well as increasing burden of the population may lead to large scale migration and conflict for the existing resources. Conflict in certain regions of Africa was the result of scarcity of food and potable water leading to large scale migration. This may be attributed to non-availability of cultivable land due to poor soil quality and this land may not be able to retain the water hence drought and scarcity of water.
The loss of the fertile soil may be due to the pollution caused by polythene bags, dumping of waste, or even e-waste. The degradation of polythene may take hundreds of years and make the land unusable for cultivation and quality of soil degrades therefore leading to barren land. This is the high time that Governments all over the world must think over the soil conservation therefore keeping the earth cleaner, greener and sustainable so that the livelihood of millions of people can be saved.
Soil being alive is the most important thing because the strength of the soil determines the strength of every life – By Sadhguru
(The author is a PhD Scholar of the Department of Zoology, University of Jammu.)